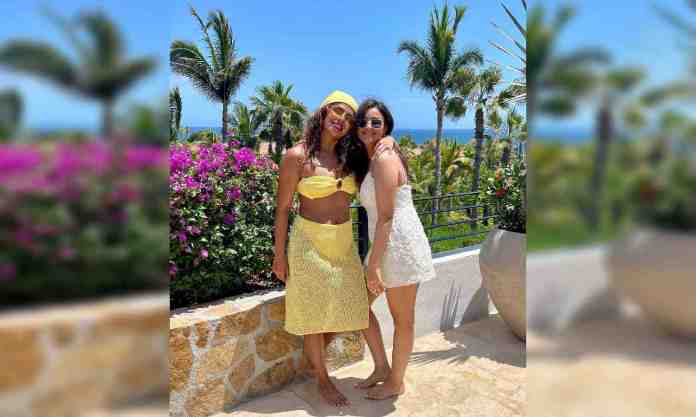 New Delhi: Bollywood’s Desi Girl Priyanka Chopra is known for her grand style. Earlier, she celebrated her 40th birthday with family and friends in Mexico. Recently, actor Parineeti Chopra also shared a series of photos from Priyanka’s birthday bash. Parineeti shared a glimpse of the fun time in two posts on Instagram.

While sharing the first set of photos she wrote, “Bday photo dump no.1. It was a whirlwind 48 hours of pure celebration, jet lag, tacos, hugs, laughs and the ocean! Will take a week to recover from, and a lifetime to forget! Happy bday to the world’s desi girl, but my mimi didi. I love you. @priyankachopra.”

She shared multiple selfies with Priyanka and Nick. There are some candid photos from the party and the pool, and some are from the beach.

In the photo, Parineeti can be seen in a white colour outfit while Priyanka opted for yellow beachwear.

For this grand celebration, Priyanka Chopra and her husband Nick Jonas played hosts, the party was attended by the former’s mother Madhu Chopra, friend Natasha Poonawalla and other close friends.

Earlier, Priyanka also shared some photos with her gang and wrote a heartfelt note. Starring the note with thanking her husband, she wrote, “Just a girl and her birthday squad! So grateful and thankful to be surrounded by so much love and to be able to spend time with my nearest and dearest. (Even though a lot of them flew in from very far). The most incredible celebrations, planned and executed to perfection by my @nickjonas. Words are not enough to thank you for the most memorable birthday… you really know how to love baby. I’m a lucky girl.”

“I’m so touched by all the birthday love I’ve received this year. The lovely DMs, surprises, calls, texts, and big hugs made the day even brighter and made me feel truly special. Thank you everyone who reached out, it means the world. Here’s to the beginning of the rest of my life. Grateful and blessed,” she added.

On the work front, Priyanka’s upcoming films and web series include the much awaited Russo Brothers show ‘Citadel’ and her Bollywood film ‘Jee Le Zara’. She will be seen alongside Alia Bhatt and Katrina Kaif in Farhan Akhtar’s film. She also has an upcoming action thriller ‘Ending Things’ opposite Anthony Mackie. Also in the pipeline is Sam Heughan’s other Hollywood film ‘It’s All Coming Back to Me’.