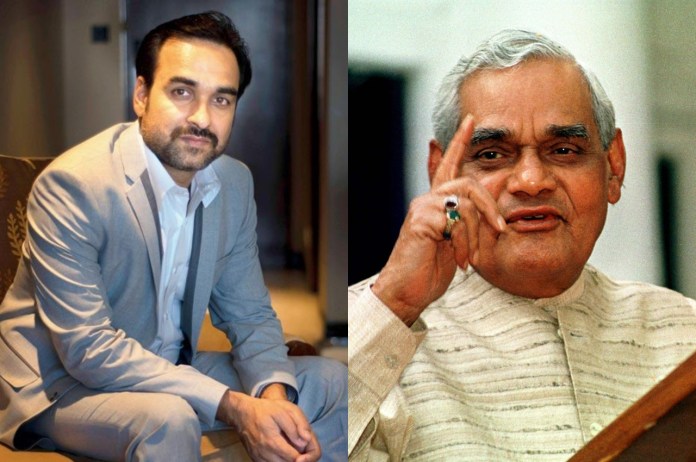 New Delhi: Atal Bihari Vajpayee, a former Indian prime minister, will be portrayed by well-known actor Pankaj Tripathi in the biography ”Main Rahoon Ya Na Rahoon Yeh Desh Rehna Chahiye – Atal.” The movie is scheduled to be in theatres around Christmas 2023 and is based on Ullekh NP’s book The Untold Vajpayee: Politician and Paradox.

June 28, 2022, saw the announcement of the biopic. Since the news was made, people in the audience have been curious to find out who will be portraying Atal Bihari Vajpayee. Pankaj Tripathi, the star of the movie Mirzapur, has worked with the filmmakers on the Utkarsh Naithani and Ravi Jadhav-penned script.

The plot of the film ”Main Rahoon Ya Na Rahoon Yeh Desh Rehna Chahiye – Atal,” centres on the life of former prime minister Atal Bihari Vajpayee, one of the Bhartiya Janta Party’s co-founders and a prominent figure (BJP).

Speaking about playing Atalji, Pankaj Tripathi expressed his views to India Today, “It’s my honour to portray such a humane politician on screen. He was not just a politician but so much more, he was an excellent writer and a renowned poet. Getting to be in his shoes is nothing but a privilege for an actor like me.”

Director Ravi Jadhav further added, “For me as a director, I couldn’t have asked for any better story than that of Atalji. On top of this, having an exemplary actor like Pankaj Tripathi to bring to screen Atalji’s story and the support of the producers. I hope that I can live up to people’s expectations with ATAL.”

Bollywood actor Pankaj Tripathi shared a post on his Instagram and wrote the caption in Hindi, “India is not a piece of land, it is a living nation.” I consider it my good fortune that I am getting the opportunity to enact the character of the great leader Shri Atal Bihari Vajpayee ji who wrote these lines! #ATAL coming soon.”