New Delhi: South star Naga Shaurya ties the knot with his girlfriend Anusha Shetty on November 20. The grand wedding ceremony took place on Sunday in Bangalore. Meanwhile, pictures and videos from the ceremony has been going viral and fans could not keep calm as the couple looked a perfect match together.

Dressed in traditional attires, the newlyweds look match made in heaven.

Anusha’s Mehendi and a cocktail reception took place in Karnataka on November 19.

Naga Shaurya chose a blue kurta with a black Patiala and coordinating footwear. He seemed every inch the future groom in his casual clothing. On the other hand, Anusha chose an embroidered pastel lehenga in pink, orange, and green with floral accents. The outfit was finished with a green net dupatta. 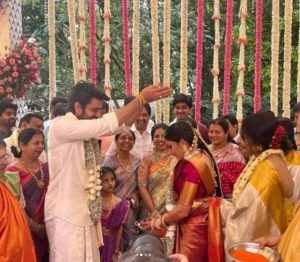 Meanwhile, Naga Shaurya got hospitalised ahead of his marriage. Information is being received that, suddenly his health deteriorated on the sets of NS24 and he fainted  after which he was immediately admitted to the hospital.Naga Shaurya is getting married after 4 days and before that his family members have become very upset due to his deteriorating health.

According to the reports, Naga Shaurya was shooting for the film and then suddenly he fainted after which he was immediately admitted to the Asian Institute of Gastroenterology Hospital in Hyderabad.

On examination of the doctors, it was found that the actor was suffering from high grade fever and due to this his health worsened and he fainted.

However, as per latest reports, Naga Shaurya’s condition is stable and there is no problem of any kind. He has been kept under the supervision of doctors. It is also being said that he used to work out in the gym for hours and this could be the reason why his health deteriorated.

At present, his treatment is going on continuously. At the same time, the fans are also upset after hearing this news and are wishing for his recovery.