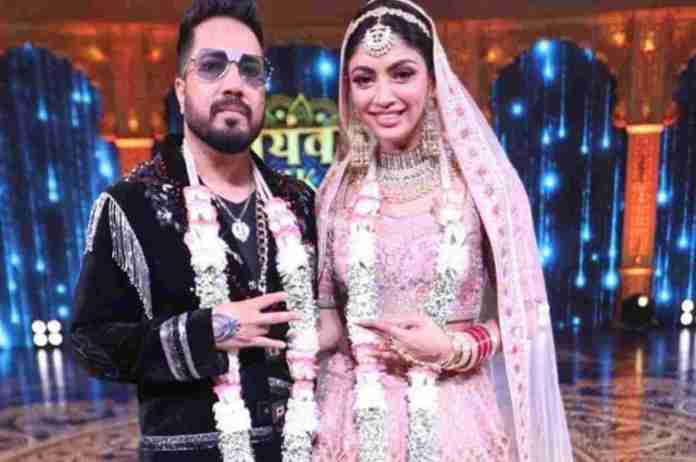 New Delhi: Akanksha Puri is an old acquaintance of singer Mika Singh, and rumours about them being a relationship have circulated in the past, but they have since been debunked. The actress staged a programme similar to Mika Singh’s Swayamvar – Mika Di Vohti, but she seemed to have already carved a particular place in Mika’s heart. The show’s finale is scheduled for today. The singer has finally chosen his spouse, and she is none other than Akanksha Puri.

After a two-month trip, popstar Mika Singh has picked Akanksha Puri as his future wife on Swayamvar: Mika Di Vohti. The television actor fought off Prantika Das and Neet Mahal for the singer’s heart.

She asks him, ‘Paaji batao, aag sawan me hi lagi hai na?’ Mika laughs.
As the 3 finalists enter the stage in their bridal looks, they profess their love and feelings for Mika. Akanksha tells Prantika and Neet, “I have been Mika’s friend for years and I will remain his friend. So even if he chooses either of you two, I will be in the package as a friend. So you have to deal with it.”

After the performances, when the show neared the finale moment, groom-to-be Mika Singh said, “I have performed more weddings than any pandit. To be honest, I have performed in more than 2000 weddings but today makes me nervous and my hands are shaking. I want to tell all three, that I really cherish the friendship.”

Mika ultimately declares Akanksha Puri’s name. The show ends on a celebratory note with the two exchanging garlands. He also gives Akanksha a ‘kangan’. Mika and Akanksha’s families hug each other.