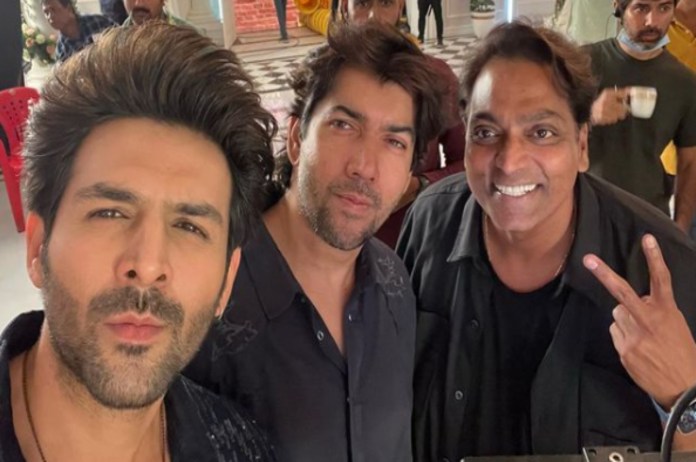 New Delhi: Kartik Aaryan has had an absolutely incredible year in 2022, with Bhool Bhulaiyaa 2 turning out to be one of the year’s biggest hits and him turning in his best performance in Freddy. As he begins the year with the filming of his upcoming blockbuster Shehzada, it also appears that the celebrity is aiming to make this year even more lucrative.

Taking to his social media, Kartik shared a selfie from the sets of ‘Shehzada’ in which he can be seen with the director Rohit Dhawan and the choreographer Ganesh Acharya. In the caption, he wrote, “Shehzada’s First Day At Work 2023.”

The star had two blockbusters in 2022, and the crowd is impatiently anticipating his third. When the teaser for Shehzada, in which Kartik can be seen in a full-on huge avatar, was just published, the audience’s excitement reached new heights.

Kartik Aaryan and Kriti Sanon’s ‘Shehzada’ is poised to greet 2023 with a spectacular trailer on January 12th! The trailer will be commemorated on a big scale never seen before, with three consecutive days of events in India’s most dynamic cities.

Following the release of the trailer on January 12th in Mumbai, Shehzada and Kriti Sanon will celebrate Lohri on January 13th in Jalandhar, Punjab. Furthermore, the actors will attend the Kite Festival Makar Sankranti in the magnificent Rann of Kutch, India’s white desert, on January 14th, making it a one-of-a-kind trailer launch.

On the work front, as the first look of his upcoming Shehzada has already left the masses impressed, Kartik will also be seen in Aashiqui 3, and Kabir Khan’s untitled next along with Satyaprem Ki Katha.