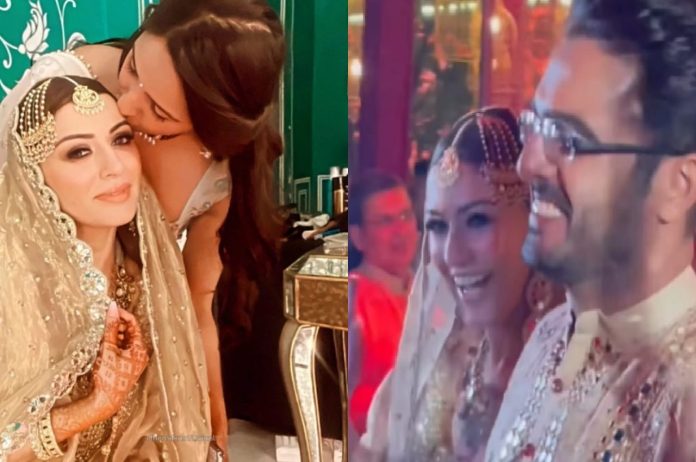 New Delhi: Hansika Motwani is going to tie the knot with her love Sohail Kathuria on Sunday, December 4, 2022. Beautiful pictures of mehndi the actress are getting viral on social media. And now, before the wedding, Hansika has been seen enjoying a Sufi night. The best photos and videos of Hansika from this Sufi night have become viral on the internet.

Hansika Motwani’s mehndi ceremony was completed on December 2. After this, she has been seen taking a grand entry with her husband-to-be Sohail Kathuria on Sufi Night. In the clip, the actress can be seen in her Begum Sahiba avatar wearing a shimmery lehenga, she is looking very beautiful in this look. On the other hand, Sohail is also very well dressed in a Nawabi kurta-pyjama. While taking the entry, the couple is seen smiling at their friends and family for the cameras.

The song ‘Kesariya’ from Ranbir Kapoor and Alia Bhatt’s film ‘Brahmastra’ is being heard in the background of the video. This song has made this clip of the couple more attractive. At the same time, fans have gone crazy after seeing the beauty of Hansika in the video. Along with this, in the comment section, fans is seen wishing them all the best for their future life.

Wedding on THIS date

On December 4, Hansika Motwani will take seven rounds with her boyfriend Sohail Kathuria at the 450-year-old Mundota Fort in Jaipur. Friends and family members of both will be involved in this grand wedding. Sufi Night was organized after the Mehendi ceremony on December 2, and on December 3, the music ceremony has been kept.

Finally, on December 4 both will get married and become each other forever. This grand wedding will be telecast on the OTT platform Disney Plus Hotstar.