Enrique Iglesias passionately kisses a fan, grabs her by waist; netizens say ‘this is assault’ 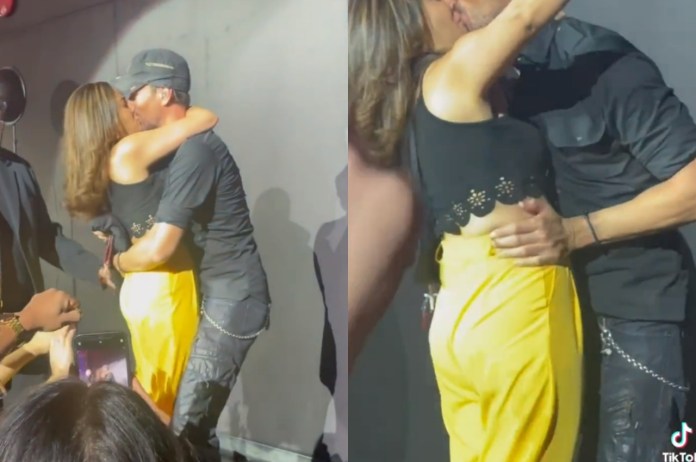 New Delhi: To meet Enrique Iglesias is every 90s kids dream come true. One of the best pop icons across the world, Enrique Iglesias often makes headlines for his adventurous social media appearances. A new video of the singer is making rounds on social media which shows him passionately kissing a fan and it is making the his admirers all across the world fume with jealousy for obvious reasons.

Enrique Iglesias is currently performing in Las Vegas. He has fans across the world and one of them was able to be the protagonist of the video that the singer himself shared on social media.

The Loco singer who has been with his partner Anna Kournikova for more than two decades is seen planting a kiss on a fan’s cheek. However, things turned quite steamy and the two were soon seen sharing a smooch with the ecstatic fan shooting the moment. Initilaly, Enrique appears surprised but soon grabbed the fan by waist and allowed her to snap selfies of the smooch before pulling away and running off as his security awkwardly watched on. In the caption of the post, Enrique wrote: “Friday night in #LASVEGAS @resortsworldlv see you tonight!!!! axs.com/enriqueinvegas.” Watch video:

The video has managed to garner 558,479 likes and over 3,000 comments. Fans have been taking to the comment section to praise the singer for his treatment to his fans. “I love you Enrique,” wrote one fan, while another mentioned, “So lucky! You are the best to your fans.” However, a section of netizens also found the moment quite awkward as one wrote, “I’m confused…. Anna is cool with this?? I wouldn’t be. “This is assault,” wrote another person.

Also Read :- DoctorG has booked his appointment for 14th Oct Only in theatres near you