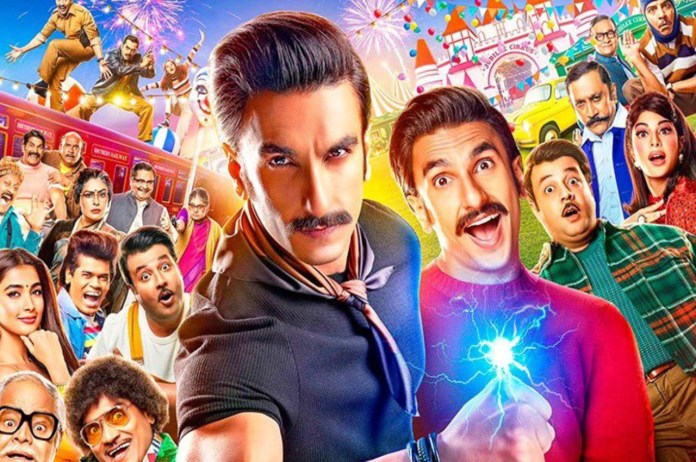 New Delhi: Cirkus, directed by Rohit Shetty, failed to draw audiences to theatres despite extensive advertising and the imposing swag of Ranveer Singh. The movie, which did poorly on opening day, also performed poorly on Christmas. Along with Ranveer, other notable actors who appear in the comedy include Jacqueline Fernandez, Pooja Hegde, Johnny Lever, Mukesh Tiwari, and Varun Sharma.

’83 and YRF’s Jayshbhai Jordaar were two straight disasters for Ranveer Singh. After the two films, the actor felt confident in his ability to carry off his part in Rohit Shetty’s blockbuster Cirkus. However, the movie did not appear to impress the audience based on the box office collection trend. The third-day data are now available, and they undoubtedly did not receive a nice response after a weak opening. According to Day 3 estimates, the movie brought in about Rs 7.45 crore on Day 3.

Cirkus made Rs 6.25 crore on its opening day, which is a fairly meagre sum for a holiday movie, according to trade expert Taran Adarsh. Day 2 saw negligible growth, but it still brought in Rs 6.40 crores. For a movie with many A-list actors, the third day’s gain of merely 1 crore was not promising.

Cirkus is produced and directed by Rohit Shetty and is distributed by T-Series, Gulshan Kumar, and Bhushan Kumar. Ranveer Singh plays two roles in it. Along with them, the movie also features Johnny Lever, Sanjay Mishra, Murli Sharma, Sulbha Arya, and Vrajesh Hirjee. Ajay Devgn and Deepika Padukone both make cameo appearances.

The film is based on the Hindi movie Angoor from 1982, which was a remake of Do Dooni Chaar from 1968. The latter was a remake of the Bengali movie Bhranti Bilas from 1963. The release day for Cirkus is December 23, 2022.