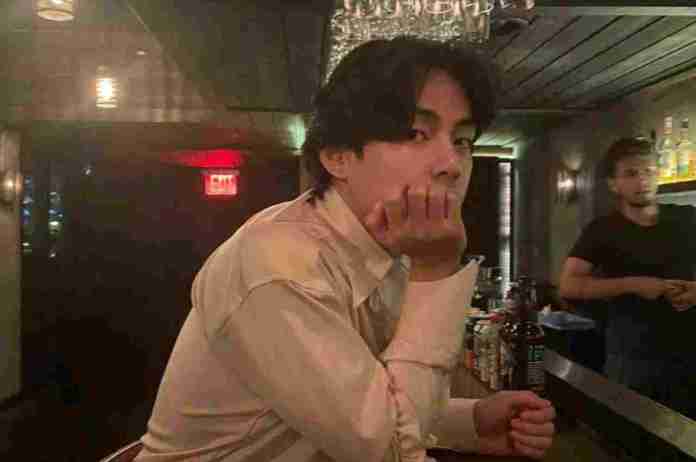 New Delhi: BTS member Kim Taehyung aka V is known for his charming looks. Termed as World’s Most Handsome Man, V starts trending on social media as soon as he drops new pics. In the recent, V has dropped another set of sexy + cute + funny pictures oN  his Instagram space and as expected, he is trending on Twitter with army going gaga over their fav K-pop idol’s looks. The carousel post has V striking funny poses in the first pic, but by the end of it, you would find him being his goofy self. Well, hasn’t duality been V’s strongest suit?

In the first pic, V is seen striking a pose a at a bar and looks mesmerising as he gazes into the camera. Then, we come across a video which appears to be from a house concert that he attended. The third pic has him admiring the beauty of New York as his back faces the camera. Then, we have another classic Kim Taehyung selfie, a picture of beautiful sunset, and a river view. Up next, there is Kim Taehyung being his goofy self as he poses with an elephant statue. Other pics have Kim Taehyung cheerfully posing. Check out his post below:

Meanwhile, Army is going crazy on the internet, as they can’t get over Kim Taehyung’s beauty. “Happiness looks good on him. WE LOVE YOU TAETAE! #BTSV #KimTaehyung,” wrote on fan.

Happiness looks good on him.
WE LOVE YOU TAETAE!💜

“You always find a way to make my day a little brighter#KimTaehyung,” wrote one fan.

You always find a way to make my day a little brighter 😍😘 #KimTaehyung pic.twitter.com/MdIMc3LjqT

You have to have some kind of magic inside you, because you can feel it whenever our heart is calling you~💚🪄🌟#KimTaehyung pic.twitter.com/QdGdoho0VG

Another fan mentioned how it took them 2 hours to process V’s new pics.

My baby really did come home today😭😭just be happpy my unbothered king V 💘it took me two hours to process his NYC pictures😭we breathed the same air for a week and you were so happy #KimTaehyung #BTSV you deserve the world 🥹😤💚💜 pic.twitter.com/8YhDYEYYCi