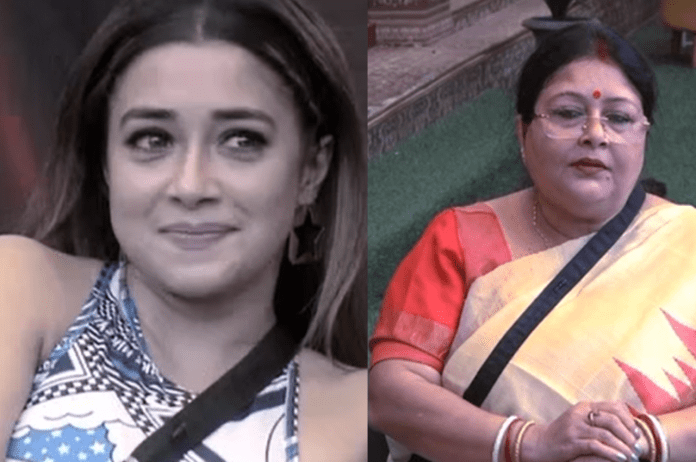 Bigg Boss 16: The Bigg Boss 16 house carried on with family week. The mothers of Shalin Bhanot and Tina Datta arrived at the residence to greet them on day 103. The participants welcomed them with excitement, but they also anticipated some turmoil. When Farah Khan, the sister of Sajid Khan, entered the house in an earlier episode, she revealed that Tina and Shalin’s mothers had a fight outside the house. Shalin, Tina, and the other housemates were stunned by the information.

Tina’s mother was the first to enter the house. She sang “Ekla chalo re” as she entered the house. She accidentally hugged Tina’s rival Sreejita De from behind. when she realised it wasn’t her daughter, s he stepped aside and inquired about Tina.  Shiv Thakare and Archana Gautam were inconsolable as a result. She afterward proceeded to the lounge area to greet Tina and gave her a bear embrace. She described how she accidentally gave Sreejita a hug. The actress questioned her mother about Shalin’s devotion to her. Her mother said that he doesn’t love her at all and that he is only acting in this way for the sake of the game.

After a while, when Shalin’s mom entered the house, Tina asked her mother to be calm and not create any ‘tamasha’. She told her that she doesn’t want any drama happening because of her in the house. Tina’s mother responded saying, “Tu tamashe ki tension mat le. Main teri maa hun, tu meri beti hai. Tu meri maa nahi hai”.

The father of Nimrit Kaur Ahluwalia made an effort to convey to his daughter the importance of maintaining her individuality. He advised her not to get lost while out with her companions. He also explained how Sajid Khan was the cause of the conflict in the mandali and gave her advice to look outside of it. Nimrit remained mute throughout the entire exchange. If she got his point, her father questioned her. To this Nimrit lashed out at her father saying, “I always get an overdose from your conversation because you think that I don’t understand anything. But to your surprise, I understand everything.”

“Secondly, everything shouldn’t be vocalized. And you know what is your problem? Everyone’s parents tell their kids how proud they are of them but you always misjudge me. It’s a fact, Dad. Your expectations are too high. I’ll do ten things right and you will never compliment me or make me feel good. It has happened to me since childhood because you have some unrealistic expectations of me. Your parenting is such that you don’t trust me. How I see my life and how you see life is totally opposite. I’m meeting you after 100 days and I’m irritated. I don’t know who to have a conversation with”.