HomeEntertainmentAyushmann Khurrana has THIS to say about cricketer Arshdeep Singh after loss... 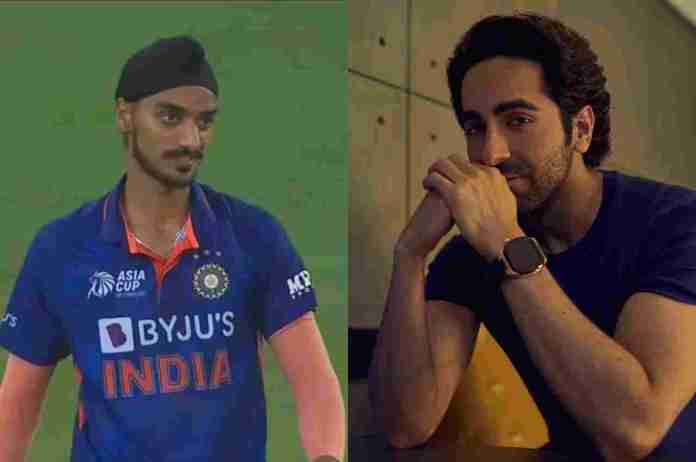 New Delhi: After Pakistan’s cricket team defeated India in the Asia Cup on Sunday, actor Ayushmann Khurrana asked people on Instagram to focus on the good. He praised Virat Kohli’s performance in a video that he shared. He also defended fast bowler Arshdeep Singh, who is under fire for missing a crucial catch that had the potential to win the match. Also read: After India vs. Pakistan, Swara Bhasker and Gul Panag support Arshdeep Singh despite online harassment.

Ayushmann and his group can be seen having fun while holding the flag of their country in the video posted on Instagram Reels. Alongside him are actors Manjot Singh and Abhishek Banerjee.

Sharing it, Ayushmann wrote, “It’s been almost 24 hours but can’t get over last night’s nerves. There’s always a heartbreak when India loses a match. But let’s look at the silver lining. Kohli is in form now!”

“SKY is looking good. Also our openers Let’s not be fickle and fair weather. We should support our team even when they lose a close one. And for God’s sake, stop trolling Arshdeep. He’s a great prospect. Expecting fireworks in the rest of the tournament. Praying for the next clash,” he further added to the post.

Arshdeep Singh missed Asif Ali’s catch on Sunday at the Dubai International Stadium during the 18th over. On social media, Arshdeep received a lot of backlash from fans who called him names and even called him a traitor on his wikipedia page.

Earlier, Swara Bhasker had tweeted in his support, writing on Twitter: “We love you and we are proud of you @arshdeepsinghh! Stand strong! (yellow heart and national flag emojis).”

“Truly tragic the way @arshdeepsinghh has been trolled. And it appears to be the handiwork of another IT cell. Don’t fall for it. P.S. The misfortune of devious propaganda is, others can do it too. And it works like a dog whistle, with the intended recipients unaware,” tweeted Gul Panag.