HomeEntertainmentAnushka Sharma and Virat Kohli are two peas in a pod in...

Anushka Sharma and Virat Kohli are two peas in a pod in these romantic pics, check out 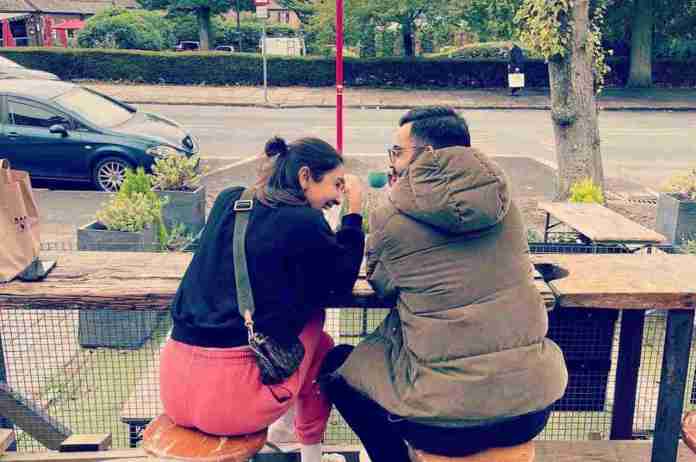 New Delhi: We can’t stop staring at Anushka Sharma and Virat Kohli’s new pics that the actor posted on Instagram on Monday. In the pics, the power couple can be seen chatting candidly while sipping tea in the picturesque location of the UK. Anushka used the heart emoticon when sharing the pics. Anushka Sharma is currently shooting for her upcoming film Chakda Xpress which features as the former India Women Cricket Team Captain Jhulan Goswami. Now, seems like Virat, too, joined her after India’s stint at Asia Cup came to an end. Soon after she shared the post, her brother Karnesh Ssharma dropped heart emoticons. Their fans also flooded the comment section with heart and love-struck emoticons. Check out the post below:

Also Read :- Man buys 30 tickets of Brahmastra, this is what happened next

On Saturday, Anushka took to Instagram to share a picture from a park where she went with her daughter Vamika. In the captions, she wrote, “I had a great day at the play park that we took our daughter to”. Check out the post below:

When Virat Kohli scored 71st century during the Asia Cup match against Afghanistan, Anushka Sharma shared an adorable post.  “Forever with you through any and everything,” she wrote sharing the post. Virat was quick to drop heart emoticons in the comment section.

Anushka recently took her parents out on a breakfast date. Grinning from ear to ear, Anushka wrote as the caption: “Breakfast date with the parents”.

Talking about film front, Chakda Xpress marks Anushka’s return to silver screen after four years. She was last seen in 2018 film Zero along with Shah Rukh Khan and Katrina Kaif. Announcing her new film, Anushka had earlier written, “From support systems, to facilities, to having a stable income from playing the game, to even having a future in cricket – very little propelled women of India to take up cricket as a profession. Jhulan had a fighting and extremely uncertain cricketing career and she stayed motivated to make her country proud. She strived to change the stereotype that women can’t make a career out of playing cricket in India so that the next generation of girls had a better playing field. Her life is a living testimony that passion and perseverance triumphs over any or all adversities and Chakda Xpress is the most definitive look into the not so rosy world of women’s cricket back then. There is still a lot of work to be done and we have to empower them with the best so that the sport can flourish for women in India.”