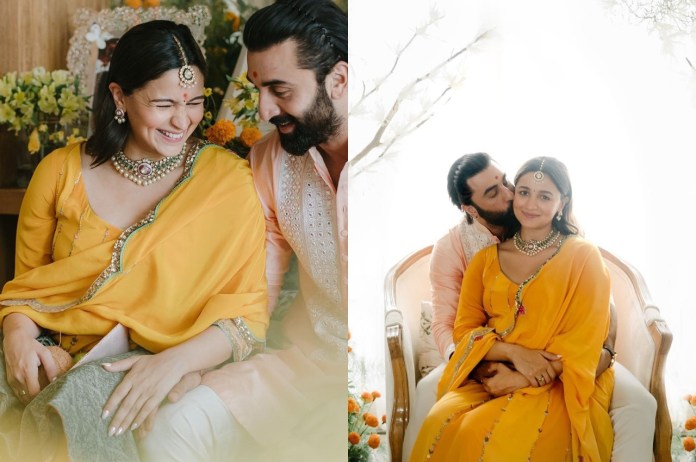 New Delhi: Alia Bhatt has shared a series of series of photos of herself, husband Ranbir Kapoor, and the family and friends from her baby shower. Alia and Ranbir appear in three of the photographs, she in cheerful yellow and he in peach and white. Three more images are shared between their families and friends: one for the Kapoors, one for the Bhatts, and one for Alia with her best pals, including Akansha Ranjan Kapoor. Alia is shown with her mother, Soni Razdan, father, Mahesh Bhatt, sisters Shaheen and Pooja, and aunt Tina in a family portrait.

The first picture features Alia Bhatt and Ranbir Kapoor in traditional fits. In the second click, we can see pic picture perfect moment of Ranbir Kapoor giving his wife Alia Bhatt a peck on her cheek that will take your breath away. Alia Bhatt is incomplete without her friends who have stood by her side through thick and think. The third picture of Alia Bhatt with her girl gang is here to back our claim. Alia Bhatt with her mother Soni Razdan, father Mahesh Bhatt, and sisters Pooja and Shaheen Bhatt also look cheerful in one of the pictures.

Alia recently shared a new video from the Time100 awards ceremony, which took place on October 2nd, on Wednesday (Sunday). Alia had stated in her award acceptance speech, “I am really happy to be here tonight as a representation of my nation – a country that has helped to build both me and my profession. India is a country that prioritises variety above everything else.”  “There are so many rules these days – especially for women. Don’t be loud. But don’t be timid. Don’t be too curvy. But don’t be too skinny. Have ambition. But don’t overreach. Be confident. But not cocky. There are so many rules that knowingly or unknowingly we think in order to be liked, to be loved, to be good, we have to be completely devoid of fault – an impossible, mythical being that could only really exist in the pages of a fairytale. But over the last ten years I’ve come to fully realise something I subconsciously knew all along. Perfection is boring. It’s the flaws that make you, YOU,” she captioned her video.

Also Read : THIS is why Dhanush and Aishwaryaa Rajinikanth called off their divorce

Meanwhile, on the work front, Alia Bhatt was last seen in Brahmastra, also starring Ranbir Kapoor, Amitabh Bachchan, Nagarjuna Akkineni and Mouni Roy in pivotal roles. Up next, Alia will be seen in Heart of Stone. The film marks her Hollywood debut.