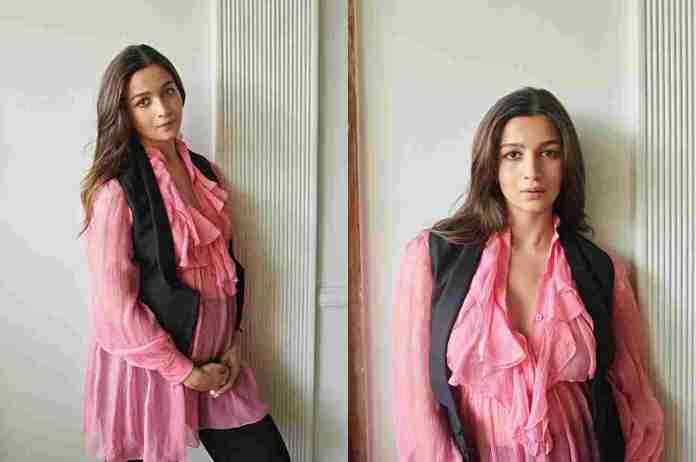 New Delhi: Alia Bhatt is expecting her first child with husband Ranbir Kapoor. While Alia is currently basking in the success of her last film Darlings, she is all set to be back in theatres with Brahmastra. The mythological fantasy directed by Ayan Mukerji will release on September 9. Alia has started promotion campaign of the film and has been serving fans with some of the most stunning looks. In the latest, the actor has dropped another set of oh-so-gorgeous pics. We also see the actor proudly showing her baby bump off in the new post.

Alia Bhatt on Friday took to her Instagram space to share new pictures flaunting her baby bump. Alia, unlike the ongoing trend, has been careful with her pregnancy looks. The actor has been opting for loose fit which doesn’t show much of her baby bump. But, in the latest pics, the actor is seen proudly flaunting her baby bump in a pastel pink top. Her new pics has received a whole lot love from Bollywood. Kareena Kapoor Khan was totally in awe of Alia as she dropped a lovely comment. “Uffffff owning it and howwwww😍😍😍😍Love youuu,” she wrote, while Karisma Kapoor Khan dropped an array of heart emojis. “❤️ glow ❤️ beauty,” wrote Alia’s sister-in-law Riddhima Kapoor Sahni.

“The light .. is coming!(In just two weeks)” wrote Alia as she shared her pics. Check out the post below:

Alia Bhatt will soon make her Hollywood debut with Heart Of Stone, co-starring Gal Gadot. Other than that, the actress also has Jee Le Zaraa in her pipeline.

Talking about Brahmastra, the film also stars Amitabh Bachchan, Nagarjuna Akkineni, and Mouni Roy in key roles. The film has been presented by SS Rajamouli in South.