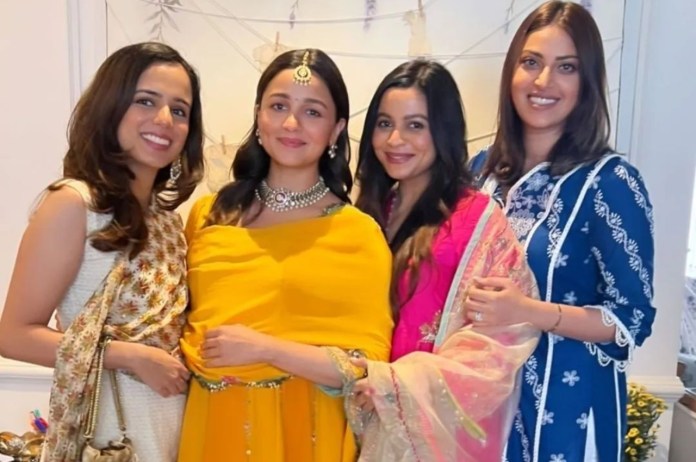 New Delhi: Alia Bhatt is expecting her first child with husband Ranbir Kapoor. Her baby shower took place on Tuesday. She was joined at her house in Mumbai by her sister Shaheen Bhatt, mother-in-law Neetu Kapoor, sister-in-law Riddhima Kapoor, and grandmother Neila Devi. Also present on the occasion were Alia’s close friends.

Alia’s friend Anushka Ranjan shared a snapshot from Alia’s baby shower in which she showed off her pregnant glow. She was dressed in a yellow outfit and was adorned with jewellery. She was accompanied by her sister Shaheen, who looked lovely in pink attire. Akanksha Ranjan was also present at the event. 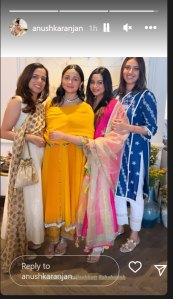 Alia had recently shared how she and Ranbir plan to divide their duties as parents. Speaking to CNBC, Alia said, “I think the journey of discovery will begin once the baby comes. Definitely the intention is to share, as that’s most important. Ranbir is very happy. He said, ‘Baby you work from this month, so I’ll take time off, and then I come back, and you take time off.’ We just keep taking time off. He is very happy to share that responsibility. He recently said in an interview that he has a ‘big responsibility on his head, and that is to send me (Alia) back to work as the movies will complain if I don’t do my bit as the parent.’”

Alia Bhatt and Ranbir Kapoor tied the knot on April 14 this year. They announced their pregnancy in July. The couple, on the work front, were recently seen in Brahamstra.