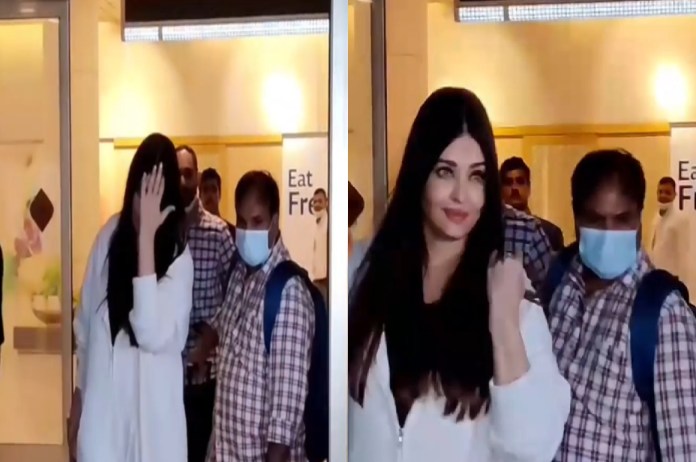 New Delhi: Bollywood star Aishwarya Rai is usually known for her all-black airport look and she usually travels with her daughter Aaradhya Bachchan. The actress on Friday spotted at the Mumbai airport all by herself and this time she ditched her usual look and opted for something cool. While stepping out of the arrivals gate late Friday, she opted for a long white overcoat over black tee and tights paired with white shoes and a black handbag.

The video has been shared by the paparazzi account ‘Viralbhayani’ on Instagram. After the clip, many started wondering if she was pregnant. One fan commented, “Seems pregnant… Good news surely expected.” Another fan wrote, “Is she pregnant?” “Baby no. 2 is coming,” a fan user said.

On the same day in the morning, the actor was spotted at the airport with the same look. She also greeted the fans with a smile and posed for the camera. In the video from her departure which has gone viral on social media, fans spotted the wallpaper o her mobile phone. It was a close-up photo of her daughter Aaradhya.

The actress is waiting for the release of her much-anticipated film, Ponniyin Selvan 1, helmed by Mani Rantnam. The film is based on Kalki Krishnamurthy’s 1955 Tamil novel, it is set to hit theatres on September 30. The film also stars Vikram, Karthi, Trisha Krishnan, Prakash Raj, Jayaram, Jayam Ravi and Aishwarya Lekshmi, among others. The Tamil film will be available in Telugu, Kannada, and Malayalam.

In the film, Aishwarya will be portraying two roles which are Nandini – a Pazhuvoor queen and the other being Mandakini Devi, Nandini’s deaf and mute mother.