‘You gave them 27 years, I am asking for only 5’: Arvind Kejriwal to Gujarat ahead of Assembly polls 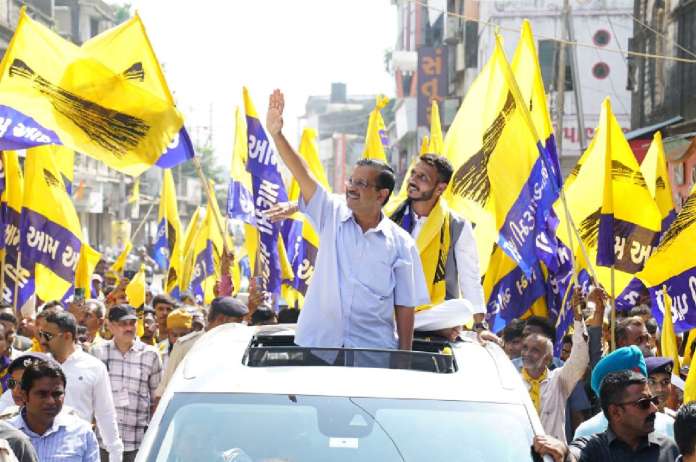 AAP National Convenor and Delhi CM Shri Arvind Kejriwal hit the roads for the fourth consecutive day in Gujarat on Tuesday. The AAP has been on an intense campaign in the state this week with both its CMs and all of its senior state leadership traversing across Gujarat in a bid to pitch for change in the state. In this vein, Shri Arvind Kejriwal took out three massive roadshows in Junagadh, Keshod and Mangrol on Tuesday.

He said, “Poverty can only be eradicated when every child gets the best possible quality of education; just like Delhi, AAP will transform the education system of Gujarat and give excellent education to every child. We developed world-class schools in Delhi, now children of labourers-rickshawallas are becoming doctors, engineers and advocates, this is how you break the poverty cycle. AAP Government will give 25% subsidy on Diesel as per market rates to fishermen; we will end corruption and deposit the subsidy directly into the accounts of fishermen. Will give interest-free loans and MSP on fishes to fishermen; will make a plan to give them financial assistance in case of death during accidents. Throughout the globe, only Delhi and Punjab enjoy 24×7 free electricity; from March 1, Gujarat will also get 24×7 free electricity and zero bills. Only the Aam Aadmi Party talks of education-healthcare, electricity-water, roads, employment and inflation; BJP-Congress fear talking about them. BJP-Congress come here begging for one more chance every election, you gave them so many chances, why do you deserve more? You gave them 27 years, I am asking for only 5; I will fulfil every promise I’ve made to you.”

24×7 free electricity a magic only I know; after Delhi and Punjab we’ll do it in Gujarat: Arvind Kejriwal

While in Junagadh, Shri Arvind Kejriwal said, “I feel like I’ve become Gujarat’s own son. The amount of love we’ve received in Gujarat is unfathomable. Some call me their brother, some their son. I want to assure everyone that I will pay back for your love and compassion. This brother of yours will take responsibility for your family’s well-being as soon as the AAP forms a government in Gujarat. Today, the situation of inflation is unbearably painful. It is difficult to manage household expenses, especially for those looking after kids. I will stand by your side now. After we come into power in December, you will not have to pay your electricity bills from March 1. We’ll look after it. Everyone will receive zero bills. Back in Delhi, everyone has a 24 hour power supply and zero bills. The Punjab government is doing the same thing. This is magic known only to me. Only Delhi and Punjab witness this miracle. Only Kejriwal knows how to do this. Gujarat is the next state to embark on this historic revolution. Gujarat will receive free electricity 24 hours a day, seven days a week. This is my promise.”

He added, “Poverty can only be eradicated when every child gets the best possible quality of education. We will develop excellent schools for your children here. The educational revolution in Delhi is already very famous. Today, children from both rich and poor families sit on the same bench and study diligently. The sons of a judge, an IAS, and a rickshawallah all study together. Children of rickshaw drivers and labourers are becoming advocates, doctors and engineers in Delhi. I will take responsibility for the education of your children now. We have made a whole plan. We will build state of the art schools all over Gujarat. You won’t need to pay exorbitant fees of private schools. We will develop world-class hospitals in Gujarat, as we have in Delhi. Look at Delhi’s healthcare model. It is outperforming private hospitals. Excellent Mohalla Clinics are available in your area, as are hospitals that are better than private ones. Furthermore, everyone is entitled to free healthcare. We treat any problem for free, even if it necessitates the most expensive treatment. When we take power in Gujarat, I will take care of your healthcare. We have devised a comprehensive plan for the development of 20,000 Mohalla Clinics and hospitals. Everything will be provided for free, from crocin to cancer treatment. Your brother is here for you.”

If you want hooliganism, abusive language go to them. If you want schools-hospitals, electricity-water and roads, come to me: Arvind Kejriwal

He continued, “We will arrange employment for every youth. In the last 5 years, we have generated 12 lac employment opportunities in Delhi. I know how to create employment. We will do so in Gujarat as well. Till a youth does not find employment, we will give them Rs 3,000 per month as unemployment allowance. I only have one request. I don’t know how to do politics. I can’t make lofty speeches. I talk about issues that concern a common man. I am a well-educated man. I know how to work. I’m an Engineer. If you want schools-hospitals, electricity-water and roads, come to me. I don’t know how to do hooliganism. If you want hooliganism, corruption and abusive language go to them.”

Want the people who shout Modi-Modi to remember that Kejriwal will give you employment and free electricity: Arvind Kejriwal

He added, “On my way here, some boys were shouting Modi-Modi. I have no problem with what they want to say, or what they want to shout. They can vote for whoever they want. But I’ll let them know one thing. It is me who’ll give them employment. It is me who’ll put their children in school, give healthcare to their parents. It is me who’ll give them free electricity. I know there’ll be one day when we’ll win them over and make them join AAP. I want to ask them what this government has done for them in 27 years? Did they build schools and hospitals? No one talks about education and healthcare here. No one in the BJP or Congress cares for electricity, water, education, healthcare, roads, inflation and employment. They come here asking for chance after chance. They don’t deserve another chance.”

He concluded, “You gave the BJP 27 years, give AAP 5 years too. If we don’t live up to your expectations, I won’t come here again asking for votes. I don’t have money to contest elections. I am a common man. I have been the Chief Minister of Delhi for seven years, but did not earn a single penny out of it. My bank account and my party’s bank account are empty. I want the cooperation of the people of Gujarat. You must not have seen any Chief Minister roaming on the roads like this, but I have been going around on streets like this all over Gujarat. I am working hard and putting in my blood and sweat because I do not have money like them to contest elections. I need help from all of you. I request you all to message your friends and relatives through WhatsApp saying that Kejriwal should get one chance, let’s try AAP for once. Press the broom button so hard that all the candidates of the Aam Aadmi Party are sent to the assembly with the largest margin of votes, after winning.”

In Keshod, he said, “you have given BJP 27 years, I am asking for only five years from you. I will fulfil every promise I have made to you. I don’t have money to contest elections. I am walking through the streets of Gujarat. You would have never seen a Chief Minister sweating on the streets like this. I need your support.” While in Mangrol, Shri Arvind Kejriwal said, “I have met many BJP workers. There are many workers who are very angry with the BJP. They say that during the pandemic children were dying in their houses, their parents were dying. They called their leaders but no one even picked up the phone. This time all BJP workers are trying to bring the BJP down. I want to tell the supporters of BJP to give a chance to AAP once. If I don’t work, I won’t come next time to ask for votes. BJP and Congress are in cahoots. Earlier they used to meet secretly, now both of them have gone public displaying their love. This time defeat both these parties. Think of your children and your family. What did you get by following the parties?”

Fishermen don’t have houses in Gujarat, our government will arrange for houses for them: Arvind Kejriwal