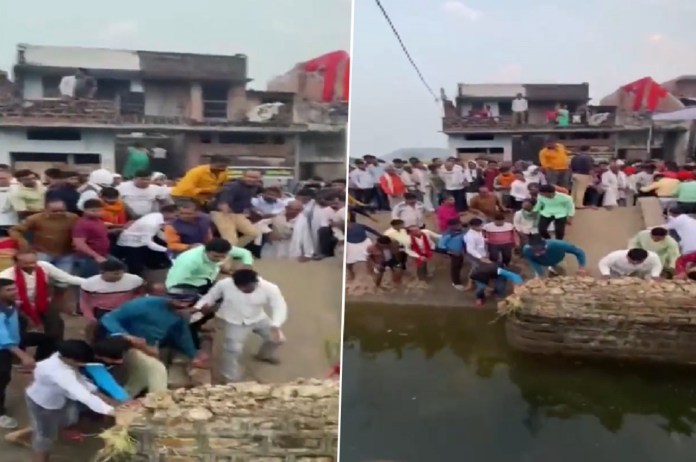 Uttar Pradesh: After Morbi, now a part of the bridge suddenly collapsed in Chakia, Uttar Pradesh. The incident took place during Chhath Puja. Thankfully no one was injured in the accident.

According to police, a few bricks of the bridge slipped and fell into the river during Chhath celebrations, but no one was injured.

#WATCH | UP: A part of a canal culvert carrying many people collapsed in Chandauli's Saraiya village of Chakia Tehsil during #ChhathPooja celebrations earlier today

A few bricks of the bridge slipped & fell into the river during #Chhath celebrations, but no one was injured: ASP pic.twitter.com/IQMykWjhrw

According to the information, this incident is of Saraiya village of Chakia tehsil area of Chandauli district. During the Chhath Puja celebrations here, many people were standing on a part of the culvert of the local canal.

During this, suddenly some bricks of a part of the bridge slipped and fell into the river. Due to the sudden shaking of the bridge, there was panic among the people present there. Somehow people saved their lives and started running away from the bridge.

According to the local administration, there was no loss of life in the accident. It took place due to the large number of people present on the bridge and it is being said that the construction of the bridge dates back to the 1990s.