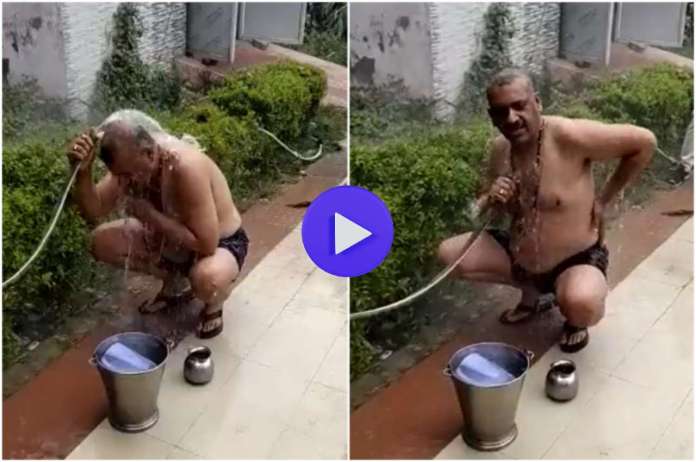 Kanpur: Samajwadi Party activists, led by MLA Amitabh Bajpai, are on Satyagraha near Mahatma Gandhi’s monument in Phool Bagh in Uttar Pradesh’s Kanpur district, despite bone-chilling cold. On Monday, during the Satyagraha, the MLA protested by taking a bath in the park, and the video has gone viral on social media.

Amitabh Bajpai has accused the state administration of initiating bogus charges against members of the opposition. Samajwadi Party MLA Irfan Solanki and several other MLAs are protesting on behalf of the Yogi administration against the alleged filing of bogus charges.

According to the report, the Uttar Pradesh Police took action against Samajwadi Party MLA Irfan Solanki on December 3. It is claimed that Irfan Solanki and his friends set fire to a property over a land dispute. The officers then began to tighten their grip on the MLA.

Irfan Solanki was charged with many offences by the police. After fleeing for many days, he turned himself up to the Kanpur Police Commissioner’s Office in December, along with his brother and coworkers.

Following the arrest of MLA Irfan Solanki, Kanpur police lodged two further complaints against him under the Gangster Act on December 26. Irfan Solanki is now imprisoned at Maharajganj. The MLA has previously been charged in multiple incidents, including a plan conflict, arson, flying travel with forged Aadhaar cards, and giving Bangladeshi nationals with forged Indian citizenship.