This unique world record was made at ‘Jaipur Dog Show 2023’ 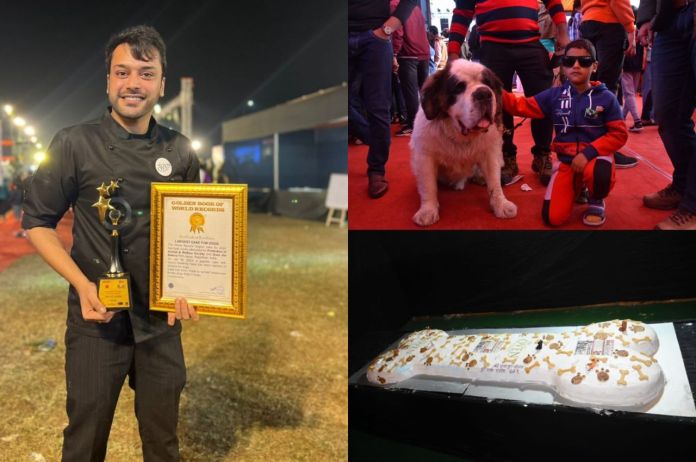 Jaipur: Pinkcity set an example by making the world’s largest cake for stray dogs. To raise awareness about stray dogs, a 160 kg cake was made in the shape of a bone. This was witnessed at the KCI Championship Show at Jaipur Dog Show 2023, where the super fun day was spent with the dogs in different activities.

During the show, two world records came out from the city of Jaipur where Chef Mayank Gopalia and Arbind Sharma of Oven The Bakery prepared a 160 kg cake in 8 hours. Peanut butter and eggs were added keeping in mind the good diet of street dogs.

This whole cake was distributed among the street dogs of Jaipur. Through this, people were made aware that stray dogs also deserve the same love as breed dogs. Mayank Gopalia thanked the organizer of the event Jagdish Chandra and the Secretary of Canal Club of India Rajasthan Chapter Viren Sharma for this initiative.

The championship was judged by Tomonori Aizawa of Japan and Simon Sim of the Philippines. This was the first time that international judges attended a dog show in Rajasthan. Dogs from many states including Delhi, Haryana, Rajasthan, Madhya Pradesh, Punjab, and Gujarat participated in the show. In the competition, the judges give marks based on the dog’s walk, jump, height and conformation.

Many unique breeds like Siberian Husky, American Akita, French Bulldog, Shitzu, and Toy Pom were included in the show. Amid many fun activities, the dog squad show of Rajasthan Police took place, and the dog of Rajasthan Police showed surprising feats. Whereas the children made a drawing on dog cruelty. A large number of free adoption also took place during the events.