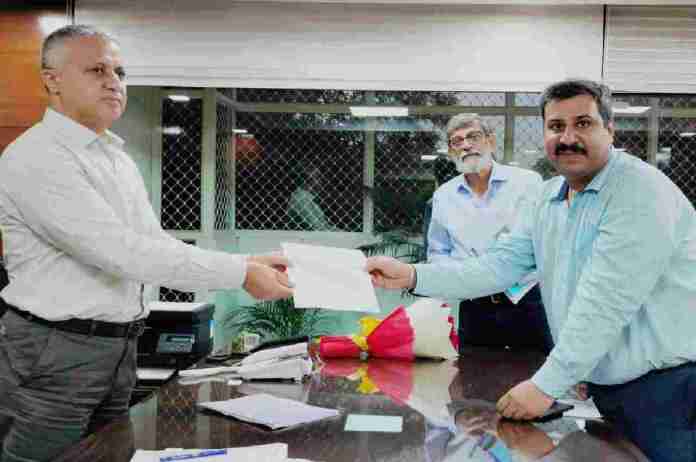 Chandigarh: The Punjab government and Gramin Vikas Trust signed a memorandum of understanding on Thursday under which they will work together to establish biomass pellet plants and farmer producer organisations (FPOs) on the principles of reciprocity and cooperation.

Both sides acknowledged that this MoU was an important step toward enabling the Punjab government to control biomass burning and lessen the resulting air pollution. Gramin Vikas Trust expressed their admiration for the Punjab government’s desire to learn and reinvent governing in order to promote growth and development.

According to official sources, the MoU is being signed while recognising the necessity for a methodical, balanced shift in the administrative approach to handling stubble burning and underlining the mutually beneficial cooperation in doing so. The officials are of the opinion that working together to manage stubble and reduce pollution will benefit both parties.

The contract states that the parties will work together on multiple priorities that will include steps like, Farmer Producer Organizations and Farmer Cooperatives will receive active support; a multi-pronged approach will be used to free the villages of the practise of stubble burning through field action, behaviour change communication, mass awareness, research, and knowledge management.

Various models of in-situ machinery will be deployed, with their operations and results closely monitored in the field in agreement with the farmers. Additionally, Gramin Vikas Trust will actively advocate for policy development on stubble management.

The two parties shall carry out all activities once it is signed in accordance with their respective obligations. Under the terms of this MoU, the Parties may cooperate through the exchange of information and documentation, visits by experts, delegations, and scholars, visits by officials and ministers, collaborative and joint initiatives, and other means as may be mutually agreed upon.

The management strategy that Gramin Vikas Trust will use was detailed in detail by Shiv Shanker Singh, CEO. He claimed that because GVT is an organisation that supports farmers and has consistently worked to improve farmers’ livelihoods, GVT plans to establish up Farmer Producer Organizations that will purchase biomass from farmers and utilise it to create biomass pellets. Farmers will be able to profit from the sale of their stubble, earn a better price, and the FPO will become self-sufficient by selling the pellets to these TPPs.

She claims that Gramin Vikas Trust will apply its expertise to create a self-sustaining environment where farmers may earn from biomass while also assisting in the reduction of pollution. The Gramin Vikas Trust would also launch a significant grassroots awareness campaign in Punjab for the cause, she stated.

Abhijit Bhattacharya, the principal consultant for Gramin Vikas Trust, praised the pro-people policies of the Punjab government. He claimed that due of biomass burning, Delhi suffers from significant pollution every year for a variety of reasons.

Even though this is a long-term effort that seeks to change farmers’ attitudes and provide them with incentives to avoid burning parali, such human-centered development projects require time to pass a threshold. We are hopeful that Gramin Vikas Trust will eventually be able to make a difference in the fight against pollution.

Gramin Vikas Trust (GVT), via its numerous interventions over the years, has been successful in creating and putting into place income improvement initiatives that give marginal and underprivileged communities integrated agriculture and livelihood support. Gramin Vikas Trust has received the “Best NGO for Outstanding Sustainable Farmer Income Enhancement” award from the FICCI Agriculture Summit, which was recently held and promotes sustainable agriculture development.