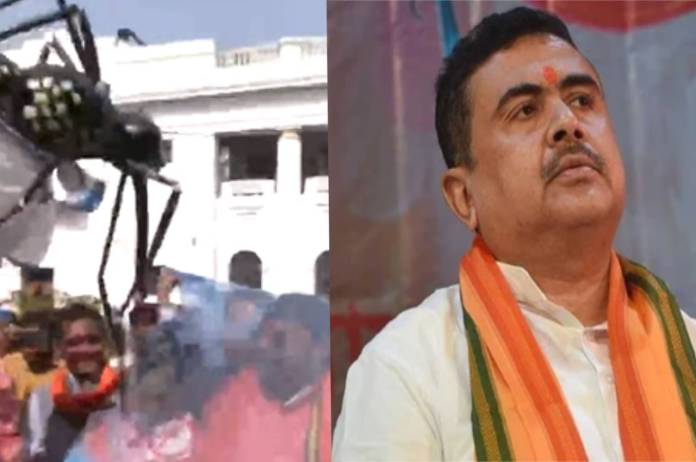 Kolkata: In a unique protest of Bharatiya Janata Party (BJP) in Kolkata, Leader of Opposition Suvendhu Adhikari Tuesday led a protest, covering themselves with mosquito nets.

This coms after the rising cases of Dengue. Adhikari slammed the Mamata Banerjee-led state government for not taking any measures to curb the spread of Dengue across the state.

#WATCH | Kolkata: West Bengal BJP leaders protest against the state government, with a mosquito net and model of a mosquito, over the rising dengue cases in the state. pic.twitter.com/lDkaOdAYDl

In a video of the demonstration, BJP leaders can be seen protecting themselves with a mosquito net from a giant mosquito dummy.

Talking to the media, Adhikari accused the health minister of the state for failing to address the issue and skip the parliamentary sessions to talk about the issue.

He said, “Health Minister does not come to the House (Assembly). No discussion takes place over Health and Home Departments, they do not take questions.”

The protest was led by Leader of Opposition Suvendu Adhikari and senior party legislator Agnimitra Paul who walked about 2 km from College Square to the Y Channel in Esplanade area.

During the rally, the two Senior leaders of the BJP accused TMC of being a party of “anti-woman, anti-tribal and anti-Constitution.”

“We ask the CM (Mamata Banerjee) to disqualify Giri and put him behind bars. His comments are anti-woman and misogynistic. It is shocking how a state minister can make such comments against the president of the country,” said Adhikari.

The LoP alleged that the state government of TMC will not be able to exist beyond the month of December “as it is gradually moving away from the masses and is no more liked by the common people.”