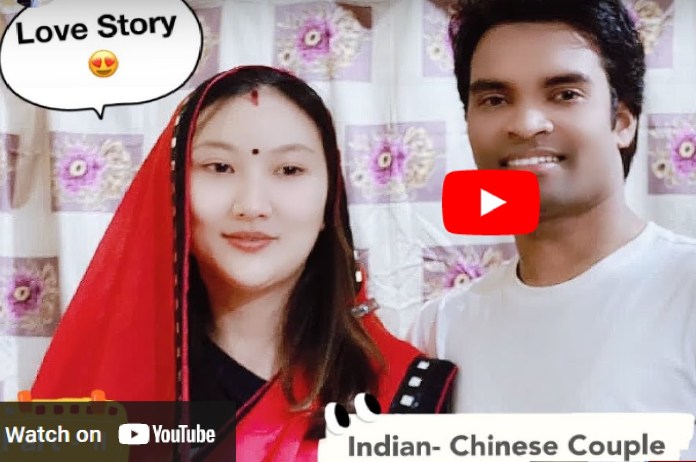 New Delhi: A girl from China lost her heart to her yoga teacher Lokesh Kumar from Chhattisgarh and propsed the latter for marriage. Also in love, the teacher accepted the offer and married to the girl.

In a video, Lokesh shared his love story about he met Hau Jong and feel in love with her. The two met in Indian Institue of Yoga located in Beijing in China where the girl was a student.

However, it was not easy for Lokesh to reach there. He told that his father is a farmer and he has four siblings. He was interested in yoga since childhood. That’s why after his initial studies he went to Haridwar to study Yoga. But due to financial problems, he could not take admission in the university.

But Lokesh got admission with his friends’ help. He , then, did post graduation in Yoga and went to Delhi for a job. After living in Delhi for a few years, he came to know that there is a vacancy for a Yoga teacher in an Indian institute in China. He applied and got selected.

In the Indian Institute located in Beijing, China, he met a girl named Hau Jong. How used to come there to learn yoga. Within a few meetings, she fell in love with Lokesh and later on she herself proposed to Lokesh.

Two Had A Break Up But Worked Out

Lokesh said that the two also had big fight because of the quarrelsome nature of his wife. But Hau was the one to miss Lokesh the most when he came back to India. She messaged her on WhatsApp and Facebook, leading to a heartmelt of Lokesh.

Now, the couple has a child whom they named Russia. Lokesh told that the meaning of Russia is ‘light of India’.