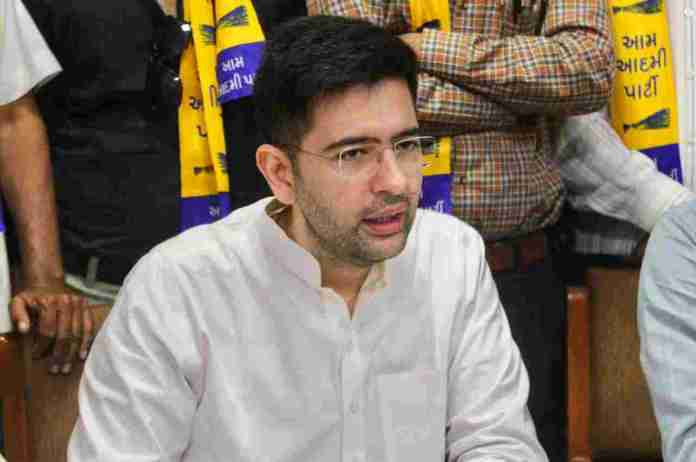 Ahmedabad: On Tuesday, while addressing the media on an important issue, Rajya Sabha MP of Aam Aadmi Party and co-in-charge of Gujarat state, Raghav Chadha said, “In Amreli district in the last 27 years the arrogant BJP Government has not built a single high school, college, or civil hospital and it seems that Amreli district has been deliberately kept backward.”

“Today the condition of Amreli is such that, if a person wants to get an X-ray done, then he has to go to Rajkot. There is a serious problem with water supply. Water comes only once in three-four days and that too at no fixed time,” he said.

He continued, “Amreli district has given many MLAs, MPs and ministers to Gujarat and the country. But these leaders did not give anything to Amreli. The 27-year-old BJP Government has always treated Saurashtra indifferently, but in the coming times, the Aam Aadmi Party Government of Arvind Kejriwal will change this attitude and do development work in Saurashtra. Here the farmers also have a lot of problems like electricity problem, water problem, wild animal problem and not getting the MSP price. All these problems have been disturbing the normal life of the people. In the name of infrastructure, people of Amreli have been cheated on a lot. Here, one can see potholes everywhere instead of the road.”

He added, “Amreli has always been kept behind and by interacting with the people I want to assure the people of Amreli that just like the people of Delhi and Punjab overthrew the decades old traditional parties and gave a chance to the new political party, i.e. the Aam Aadmi Party, similarly you also give a chance to Arvind Kejriwal. I assure you that if you vote for the Aam Aadmi Party once you will vote for us again and again, we will do amazing work in Amreli district and in entire Saurashtra. BJP has created a ‘step-Saurashtra’ but we will make ‘our own Saurashtra’.”

He further said, “If you look at the figures, then you will come to know that in Gujarat, the BJP Government has been in power for the last 27 years and 27 years ago there was a Congress Government for about 35 years. That is, the people of Gujarat gave 35 years to Congress and 27 years to BJP. This means that for the last 62 years, these two parties together have been destroying Gujarat. These people were given opportunities time and again but they did nothing for Amreli and Gujarat. Neither people’s lives have improved, people have not got free electricity, nor mohalla clinics are set up in Gujarat, nor electricity is available 24 hours, nor water is available 24 hours, no operation is done for free, and no pilgrimage for the elderly people for free.”

He continued, “If these parties have not been able to make your life better and eradicate poverty in the last 62 years, then they will not be able to do the same in the days to come. So my request to the people of Gujarat is that if you have given 35 years to the Congress and 27 years to the BJP, then now give only five years to Arvind Kejriwal, and if you don’t like our work in five years, don’t vote for us after five years.”

Then Raghav Chadha said, “I am CA and I understand statistics. I am sorry to say that the corrupt government of Gujarat has kept Gujarat in debt of 3.5 lakh crores. No one has as much understanding of business as the people of Gujarat do. Gujarati people convert even loss-making business into a profitable one, but the corrupt politicians of Gujarat have made the profiteering government a debtor. The total population of Gujarat is six and a half crores and there is a debt of 3.5 lakh crores, so it can be said that there is a debt of 58 thousand per person. As soon as a child is born in Gujarat, a debt of 58 thousand is levied on them. I request all of you to give a chance to Arvind Kejriwal to make Gujarat debt free again.”

He concluded, “The BJP is so scared that they tore our banners, posters, lodged FIRs against our leaders, demolished the Ganesh pandal built by the Aam Aadmi Party and sent bulldozers to destroy the building where AAP’s meetings are held. It is possible that after this press conference, people of BJP will send bulldozers at Amreli Circuit House. The BJP has realized that the Aam Aadmi Party has overtaken the BJP in the race for the 2022 assembly elections.”