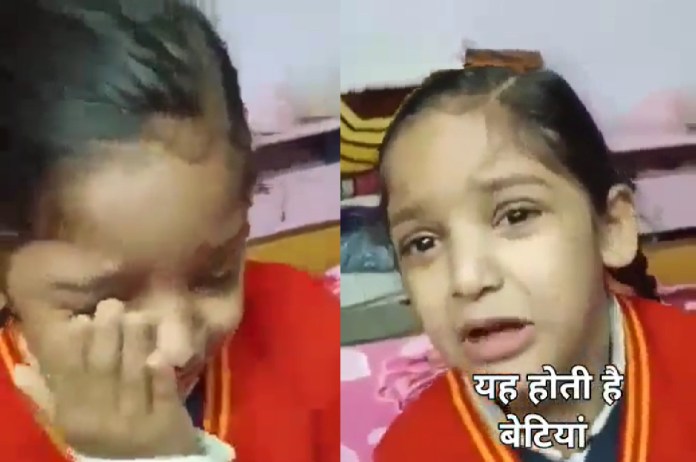 New Delhi: If a father worries about his daughter, it will not be called surprising, but the video of a daughter worrying about her father is making people emotional.

In a video going viral on the internet, a little girl is seen crying after her father did not eat her food. This video of the girl has shaken people from inside. People are writing on social media that “daughters are the best”.

In the viral video, people’s eyes were filled with tears after seeing the daughter crying worrying about her father. People are also writing that those who find daughters a burden must watch the video once.

The 2 minute 14 second video clip begins with the tears of the girl child. In the beginning of the video, the girl’s mother asks her why are you crying? What is wrong? Mother says, “I haven’t even scolded you yet.” Hearing this, the daughter sitting in school dress says in a broken voice that ‘first you stop recording, only then I will tell you.’

However, on this the girl’s mother says that first tell me then I will stop the recording. After this the child agrees and says, “I miss Papa very much.” With tears in her eyes, the daughter says that father does not eat food on time. She tells her story to her mother crying.

While the girl’s mother tries to explain to her that her father had to give up food to take care of his customers, the girl says, “To mamma, insaan khana khayega na… woh bhi to khana khaate hain, So my father will also eat food, will he not? This emotional video of the son is becoming very viral since Friday. Bollywood actress Raveena Tandon wrote, ‘My baba, so cute, God bless.’

The video has also been shared on Twitter by poet and lyricist Manoj Muntashir. He wrote- ‘After watching the video, maybe the tradition of playing drums on the birth of daughters will start. Fortunate are those in whose house Lakshmi incarnates.