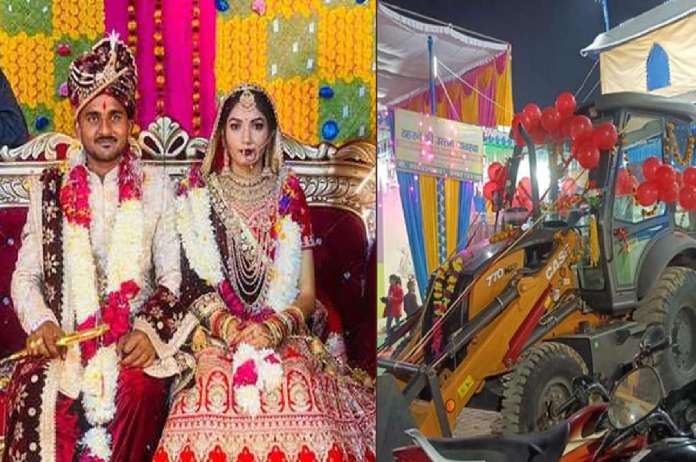 Bulldozer Baba Yogi’s Wedding: A unique case has emerged from Hamirpur in Uttar Pradesh. Here a boy has got married, whose name is Yogi. The Chief Minister of Uttar Pradesh’s name is also Yogi, and as a result, the Hamirpur marriage remains a source of contention. According to reports, the groom, Yogi, received a bulldozer as a gift. The bulldozer was adorned and transported to the wedding ceremony. Even on social media, people are expressing amusing remarks to the marriage of the groom dubbed Yogi.

The person named Yogi Sahu who got married in Hamirpur works in the Indian Navy. Yogi Sahu married on December 15th. Everyone who attended Yogi’s wedding appeared to be in good spirits. Yogi’s marriage is being much publicised.

The bride’s father stated that if a car was provided as a gift, she would stop, which is why she gave a bulldozer. Yogi was married on the Shiv marriage lawn at Sumerpur.

Why is bulldozer being discussed?

Many times in the state since Yogi Adityanath became Chief Minister, there has been bulldozer action on illegal occupation and encroachment. This UP government programme has been replicated in other BJP-ruled states. As a result, Yogi Adityanath and Bulldozer remain in contention.

Who is known as Bulldozer Baba?

Some individuals have even started calling CM Yogi Adityanath Bulldozer Baba on social media. Bulldozers have been used on the property of several offenders since Yogi Adityanath took over as Chief Minister of Uttar Pradesh. Not only that, but bulldozers have frequently appeared at CM Yogi’s rallies, with supporters posing for photographs with them.