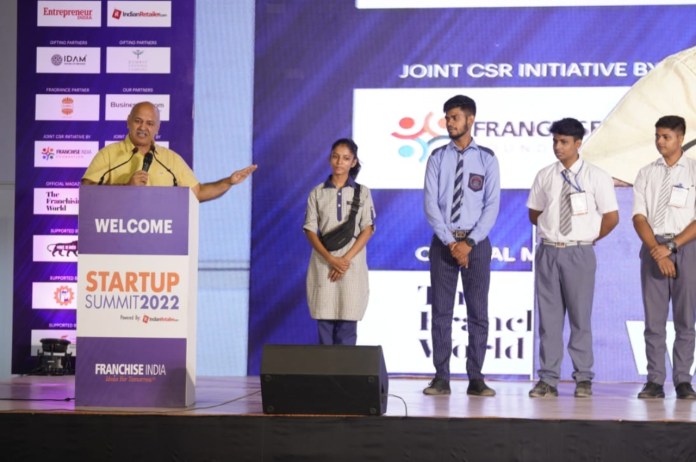 New Delhi: The Kejriwal Government is working diligently towards its goal to make India No. 1 in the world by transforming the education system of the country. In Delhi government schools, along with teaching the routine syllabus to children, it is also schooling children to be entrepreneurs or job providers instead of job seekers. The government is inculcating the entrepreneurship mindset among children from the school level itself and this will lead India towards prosperity and glory. These were the words of Deputy Chief Minister and Education Minister Manish Sisodia at Startup Summit 2022 being held at Pragati Maidan. Sisodia also interacted with the various entrepreneurs from all across the country who have participated in the summit.

It is to be noted that along with other startups, 10 Business Blasters teams of student entrepreneurs from Delhi government schools are also participating in this two-days summit.

While interacting with the entrepreneurs from all over the country at the summit Manish Sisodia said, “In a country where nearly 40 crore people are either unemployed or belong to the category of people who earn only half a dollar per day. In such a country, I see many opportunities of development because of young entrepreneurs. The work entrepreneurs of this country are doing today is no less than building a nation.” He added that events like Startup Summit 2022 are providing an opportunity for them to network and flourish. This will also help in boosting the country’s economic growth.

Manish Sisodia said, “Whatever problems governments may face, making India No.1 in the world should be their priority. The Kejriwal government firmly believes in this. My heart lies in entrepreneurship and I think that this is what I have been made to do. Interaction with entrepreneurs always inspires me to work harder for the nation to make it No. 1 in the world.”

He further added that the work today’s startups and entrepreneurs are doing in the country is the solution to rising unemployment in the country and the solution to boost the country’s economic growth. Entrepreneurs are the ones who will lead the nation towards being a superpower in the world. Sisodia said, “The country cannot be made No.1 by the ministers or the Deputy Chief Minister. Neither Prime Minister can make the country No. 1 in the world nor the Chief Minister. It’s the power of innovation, startups and passion of entrepreneurs that can lead the nation towards prosperity. Government and ministers can only be the facilitators.”

Sharing an experience from his childhood, the Deputy Chief Minister said, “When I was in school, I was taught that India is a “developing nation.” My father and my son were also taught the same thing and this is continuing for the next generations too. For over three generations we have been taught that India is a developing country. India will never be counted among “developed countries” until the mindset of the whole country will be directed towards entrepreneurship.” He further added that along with this we need to priortise the development of entrepreneurial mindset among people from the school level. We need to change the definition of success among people by inculcating the “job providers” or entrepreneurship mindset.

The Deputy Chief Minister said, “Delhi government is working round the clock towards this goal of inculcating entrepreneurship mindset among children in Delhi government schools and making India No. 1 in the world. It has introduced Entrepreneurship Mindset Curriculum (EMC) in school for students of Class 9-12 where students are taught entrepreneurial skills and are given the opportunity to set up their startups through an extended component of the curriculum “Business Blasters.” Each student is given the seed money of Rs 2000 for setting up their business individually or in teams.”

He said that 10 Business Blasters teams that showed exemplary performance in the first year of the program are also participating in the Startup Summit 2022. Introducing the teams to the entrepreneurs at the summit he said, “These are my children from 18 lakh children studying in Delhi government schools and are here because of their commendable entrepreneurial skills.”

Manish Sisodia urged the entrepreneurs at the summit that they must take a step forward and guide these young entrepreneurs so that these baby startups by students can flourish and contribute in making India the world leader.

The Startup Summit provides an opportunity for entrepreneurs to connect with the best and brightest minds to explore how to fuel their business growth. The conference brings together the speakers that are the best breed of entrepreneurs, innovators, venture capitalists, business model creators, consultants, policy-makers, academicians, support groups, business coaches and business practitioners to present and discuss innovation and success under the aegis of entrepreneurship for small and medium businesses as they recount their learning and experiences, share their insights and practices that have enriched their ventures.