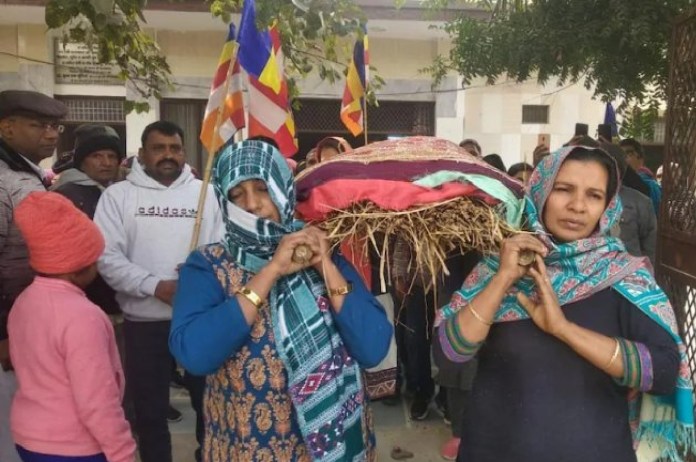 New Delhi: A 105-year-old woman had wished that her daughter-in-laws should perform all the last rites when she dies which was willfully accepted by her five sons and the entire family.

A woman Phoolpati from Sonipat’s Buddhist Vihar was bedridden for a long time. It’s when that she realised that only her daughter-in-laws were serving her. Although Phoolpati has five sons, three daughters, nine grandsons and nine granddaughters.

The sons and daughters-in-law accepted Phoolpati’s last wish and performed all the rituals by giving shoulder to Phoolpati. Two sons of Phulpati, a resident of Buddh Vihar Colony, Murthal Road, have been officers in the Haryana Government and two sons in the Central Government, while the younger son handles farming.

Phoolpati was unable to walk for five years and was confined to the cot. Phulpati’s daughters-in-law never let their mother-in-law feel uncomfortable. Staying together every moment, she kept sharing her mother-in-law’s sorrows and happiness.

Fulpati breathed his last at home late on Wednesday night. Her middle son Rohtas Kumar, retired from the post of Chief Inspector in Haryana Roadways, started a new initiative in the society by keeping the bier on the shoulders of the daughters-in-law, fulfilling his mother’s last wish. Phulpati was lit at the Sector-15 cremation ground.