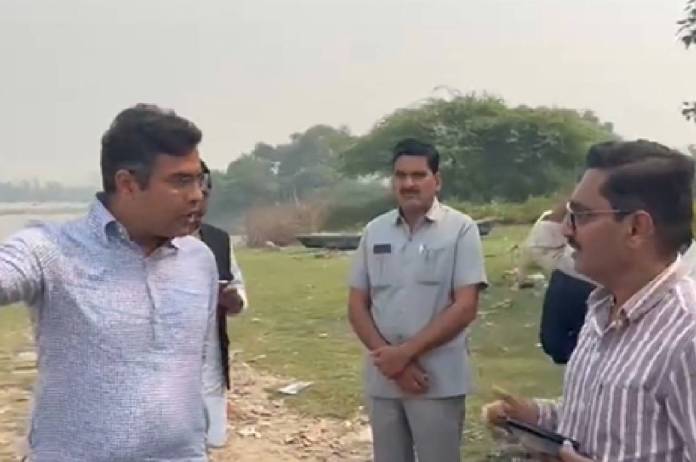 New Delhi: Bharatiya Janata Party (BJP) MP Parvesh Verma got into a heated argument with a Delhi Jal Board (DJB) official when he called the latter “Ghatiya Admi” and “Besharam”.

While visiting the Yamuna river in Delhi a day ahead of Chhath Puja rituals, the BJP MP lashed out at the official, asking why the Municipal Corporation of Delhi (MCD) did not make efforts to clean the river for the past 8 years but a day before the festival.

The BJP MP objected to the MCD’s approval of the chemical pouring into the river. He said, “I repeatedly asked them to not put chemicals into the Yamuna river. How can I not be angered if officials do not listen to me on this matter? “

Verma is being criticised for his inappropriate behaviour and use of derogatory language. In his defense, the BJP leader said, “If I have to talk in this manner for the benefit of the people of Delhi, then I have no problem; it’s right.”

During the argument, the Delhi Board official kept on insisting that the chemical in question is safe as it has been approved by the National Mission for Clean Ganga. He even displayed a copy of the official documents.

Ignoring that, the BJP MP went on to insult the official and threatened to pour chemical on the official. While pointing out that people would take dips in the river following the Chhath Pooja rituals, he said, “Pehle tu ismein dubki laga (First you take dip in it now).”

Meanwhile, Deputy Chief Minister of Delhi Manish Sisodia condemned the BJP MP saying that such attitude does not suit to a parliamentarian.

He said, “I have seen the video (Verma’s scuffle with DJB). It doesn’t suit any Parliamentarian to talk to any official like this, but today the people of Delhi themselves are answering to the BJP.”