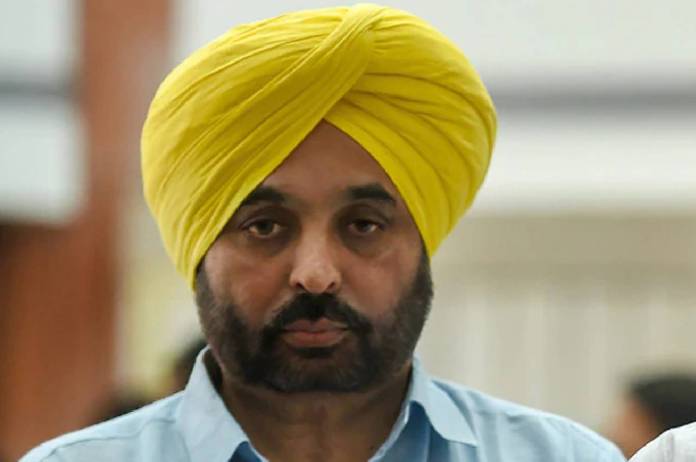 Faridabad: Punjab Chief Minister Bhagwant Mann Friday urged Union Home Minister Amit Shah to sympathetically look into the problems being faced by the farmers along with the fence on the international border between Indian and Pakistan in the state.

Addressing the national conference of Home Ministers here today, the Chief Minister urged Amit Shah to reduce the distance between border fence and actual border to facilitate the farmers cultivating their land across the fence.

He advocated that the distance must be reduced to 150-200 metres instead of existing around one kilometre to ensure that the farmers of border region are benefitted from it. Bhagwant Mann said that this will ensure optimum utilisation of the land on one hand and strengthening the security of country on the other.

Flagging another issue, the Chief Minister urged the Government of India set up Regional centre of the National Security Guards (NSG) at Pathankot. He said that during attack at Pathankot Airbase the NSG was rushed from Gurgaon which took a lot of time.

Bhagwant Mann said that setting up of the NSG centre at Pathankot will help in effective combat of terrorist activities in the entire northern region.

Citing that Punjab is a sensitive state with 553 Kms of international border, the Chief Minister also batted for inclusion of state in Category A for security reasons instead of present Category B.

He said that Punjab being a border state should be considered in category A for security reasons adding that Punjab should be treated at par with Jammu and Kashmir, Uttrakhand, Himachal Pradesh, North-Eastern states as being prone to terrorism with trans-border drone shipments.

The Chief Minister also vehemently pleaded for issuing of pending funds under Border Area Development Program (BADP) scheme. He bemoaned that these funds have not been disbursed for the past two financial years (2020-21 & 2021-22).

Bhagwant Mann said that due to this no new projects has been started in the state and problems are being faced in ongoing projects also.

Dwelling on another issue, the Chief Minister sought exemption for state in regard to Modernization of Police Force (MoPF) funds. He said that at present Modernization of Police Force (MoPF) Scheme has discontinued grant of funds for construction works and operational vehicles for Category B States (Since 2014-15). However, Bhagwant Mann said that Punjab should be given an exemption and permission to spend MoPF funds on
construction and vehicles.

The Chief Minister also sought the kind intervention of Union Home Minister for Approval of State Action Plan (SAP) of Rs. 24 crore for 2022-23 by MHA. He also said that in view of the sensitive security scenario in Punjab, additional funds to the tune of Rs. 50 crores be provided to the state for strengthening of border Police Stations, Second Line of Defence and the Intelligence infrastructure.

The Chief Minister said that there are many emerging security challenges and Punjab Government is taking all necessary steps to address these in coordination with BSF and other central agencies.

He said that since March 2022, Punjab Government has adopted a Zero tolerance policy towards drugs and has taken several decisive steps and strong enforcement action against Narcotics smuggling in Punjab. Bhagwant Mann said that 8,711 FIRs have been registered so far and 11,985 accused have been arrested in cases under NDPS Act.

He said that Punjab Government has constituted Anti-Gangster Task Force (AGTF), which has spearheaded anti-gangster operations and has busted 90 gangster modules with arrest of 384 gangsters/organised criminals including many wanted gangsters with recovery of huge cache of Arms/ammunition.

Bhagwant Mann said that Punjab Police, in active coordination with BSF has strengthened Second Line of defence by additional deployment of over 300 personnel in Tarn-Taran and Amritsar Districts, due to which there is a notable drop in drone sightings.

The Chief Minister also thanked the Union Home Minister Amit Shah for announcing to set up of a High Security Jail and Forensic Science Laboratory in the State. He said that Punjab Government is identifying land to be provided for the two projects.

Bhagwant Mann said that Punjab is the sword arm of the country which has ever defended the unity, integrity and sovereignty of the country.