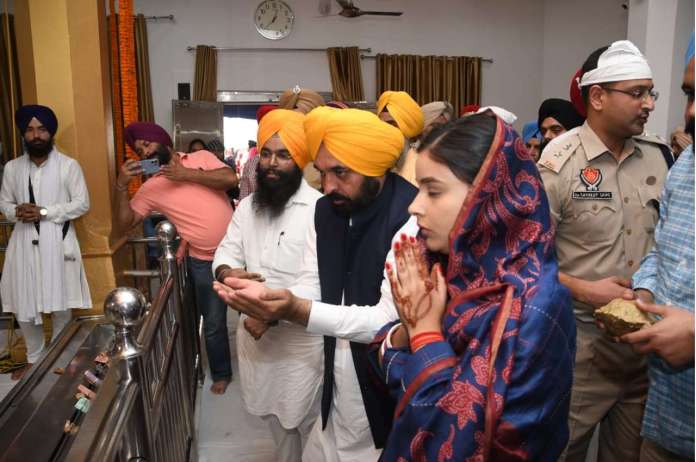 Chandigarh: On the auspicious occasion of Sri Guru Nanak Dev ji’s Prakash Parv, Punjab Chief Minister Bhagwant Mann bowed his head at Takht Sri Kesgarh Sahib on Tuesday and announced that the Anand Marriage Act would be implemented as usual.

According to the Chief Minister, this Act was notified in 2016, but it has been hanging since then. He claimed that, despite the fact that many other states have already implemented this Act, Punjab has lagged behind. According to Bhagwant Mann, this Act will now be properly implemented.

The Chief Minister bowed to Takht Sri Kesgarh Sahib and prayed that communal harmony, peace, and brotherhood grow stronger in the state with each passing day, and that Punjab lead the country in every field.

In greeting the Sangat on the auspicious occasion of Prakash Parv, he stated that Sri Guru Nanak Dev ji was a great spiritual leader who showed humanity the path to salvation through devotion to God.

Sri Guru Nanak Dev ji, he said, inspired humanity with new ideas, ideals, and curiosities and invited us to rid ourselves of the evils of hypocrisy, lies, deceit, and caste.

CM Bhagwant Mann urged people to adopt the great Guru’s spirit of service and humility and to follow the invaluable legacy of Shri Guru Nanak Dev Ji in order to create a peaceful, happy, and healthy society.

The Chief Minister invited everyone, regardless of caste, colour, creed, or religion, to celebrate this holy occasion with full devotion and dedication.

He stated that Guru Nanak Dev ji, who was known as the Jagat Guru throughout the world due to his sadness, preached communal harmony and strengthened the brotherly roots.

According to CM Mann, Guru ji’s visionary thinking can be traced back to the fact that he preached people to care for the environment at a time when there was no air pollution anywhere.

He stated that Shri Guru Nanak Dev Ji was a strong supporter of women’s empowerment and equal status in society.