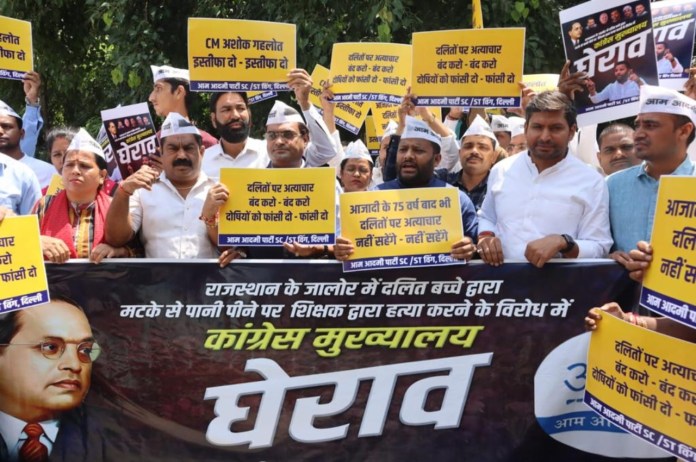 New Delhi: The Aam Aadmi Party gheraoed Congress Headquarters today to protest against continuous atrocities against Dalits in Congress-ruled Rajasthan. The Aam Aadmi Party had called for this protest after a 9-year-old dalit boy was gruesomely murdered by his teacher for touching his pot of water. The Aam Aadmi Party has demanded justice for the child and his family. Senior AAP leaders, AAP’s SC-ST Morcha and thousands of party workers showed their anguish upon the repeated atrocities taking place against Dalits in Rajasthan. The intensity of the protest was much beyond the capacity of the police to handle, and despite their best efforts to suppress AAP’s voice. The party workers raised the slogan of “Daliton Pe Atyachar Band Karo” to wake up the Congress leadership and Ashok Gehlot Administration of Rajasthan. During the gherao, AAP leaders & workers were detained by BJP’s Delhi Police for protesting against Congress Government. AAP Senior Leader and Delhi Social Welfare Minister Rajendra Pal Gautam has already written to Rajasthan CM Ashok Gehlot, demanding a time-bound investigation with a fast-track trial, and a Rs 1 crore compensation & a government job to the victim’s family.

Giving details about the protest, AAP MLA & SC-ST Morcha In-charge Kuldeep Kumar said, “A young dalit boy was killed in Rajasthan’s Jalaun by a teacher just because he touched the pot meant to store water for teachers. AAP has demanded a time-bound investigation, fast-track trial, Rs 1 crore compensation & a government job for the victim’s family. AAP has sought time to meet with the Rajasthan Governor and raise the concerns regarding atrocities against Dalits.” While, AAP MLA and Rajasthan Incharge Vinay Mishra said, “Murder of the dalit child not an isolated incident; a Dalit woman was burnt alive and a dalit Saadhu died by suicide on BJP MLA’s provocation last week; law and Order system has completely collapsed in Rajasthan. The BJP-Congress are working hand-in-hand against Dalits. Today, AAP leaders & workers were detained by BJP’s Delhi Police for protesting against Congress Government.” At the same time, AAP MLA Vishesh Ravi said, “Congress government is anti-dalit; we will not rest until justice is served to the child and his family.”

MLA and SC/ST Morcha In-charge Kuldeep Kumar said, “Today the Aam Aadmi Party is protesting against the atrocities on Dalits in Rajasthan which is being ruled by Congress and Ashok Gehlot. A Dalit child was beaten to death mercilessly and his only crime was that he touched a pot of water meant for teachers. Casteism is getting deeply rooted in Rajasthan under the Gehlot Government. The murder of a dalit child in Rajasthan has casteism written all over it. It is brutal and inhumane. The Gehlot administration should resign immediately. Caste-based incidents are not limited to Rajasthan but they are on a rise in the entire country. Be it the Yogi’s Government in Uttar Pradesh or the Central Government, all of them have failed to protect the Dalit. We are demanding that justice should be given to the child and his bereaved family. AAP has demanded a time-bound investigation, fast-track trial, Rs 1 crore compensation & a government job for the victim’s family. We have sought an appointment with the Governor of Rajasthan.”

He added, “A representative team will meet him and appeal for justice for the Dalit child and his family. The Congress is trying to cover up the incident by saying that law enforcement is doing its job but if they were doing their jobs, this incident would not have taken place. A few days ago, a Dalit woman was burnt alive in Rajasthan. This clearly shows the Gehlot Government and law enforcement in Rajasthan is upto no good.”

AAP’s Rajasthan election in-charge and Delhi MLA Vinay Mishra said, “Murder of the dalit child is not an isolated incident. On August 10th, a Dalit woman was burnt alive in Rajasthan. Incidents like these keep happening in Rajasthan in the name of caste. This has to stop. In another incident, a Dalit Saadhu committed suicide and a BJP MLA is alleged to have provoked him to take his life. That’s why we always say that Congress and BJP are one and the same. They are united internally. Our workers have been detained by BJP’s Delhi Police for protesting against the Congress Government. Not only has the crime against Dalits have increased significantly but the entire law and order system in Rajasthan has collapsed. We are protesting against the lawlessness in the state.”

MLA Vishesh Ravi said, “Caste-based atrocities are continuously increasing in Rajasthan and we are making our demands clear. Strictest punishment should be given to the culprits. Congress is saying that the teachers who is responsible for this murder has been arrested but it does not make much difference. Real work still needs to be done and there is a long way to go. The community to which that teacher belongs has conducted a meeting after his arrest and the Rajasthan Government has done nothing about it. It is an anti-Dalit government and it should be thrown out of power immediately.”