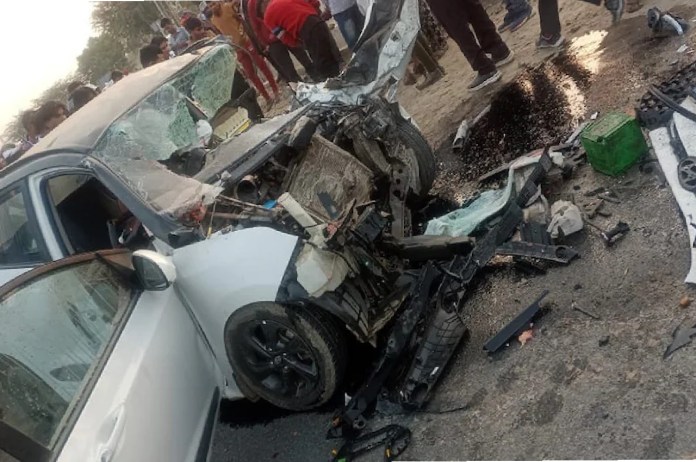 New Delhi: In a horrific road accident that took place last night on the Bhilwara-Ajmer highway in Rajasthan as many as four people died while returning from Ujjain in Madhya Pradesh.

All the youths killed in the accident were returning to Kotputli after visiting Mahakal from Ujjain in Madhya Pradesh. Meanwhile, when his vehicle reached Bandanwara, it rammed into a trailer parked on the highway from behind.

According to the information, on Thursday evening, four people in the car were going towards Jaipur from Bhilwara. His speeding car rammed into a trailer standing in front of the Government Community Health Center on National Highway 48.

On the sound of a loud explosion, the people around reached the spot and informed the police about the accident. Outpost in-charge Girdhari Singh reached the spot and took out the bodies from the vehicle and sent them to the mortuary at Bhinay with the help of an ambulance.

In the accident, the front part of the car was damaged entirely, trapping the bodies of two dead. The bodies were pulled out with the help of the local people. While two people had fallen out.

As per the sources, the dead ones have been identified as Sher Singh, Satveer, Sandeep and Hawa Singh. Those who were present on the spot at the time of incident told that most of the trailers are parked on the roadside on National Highway 48, due to which road accidents often takes place.