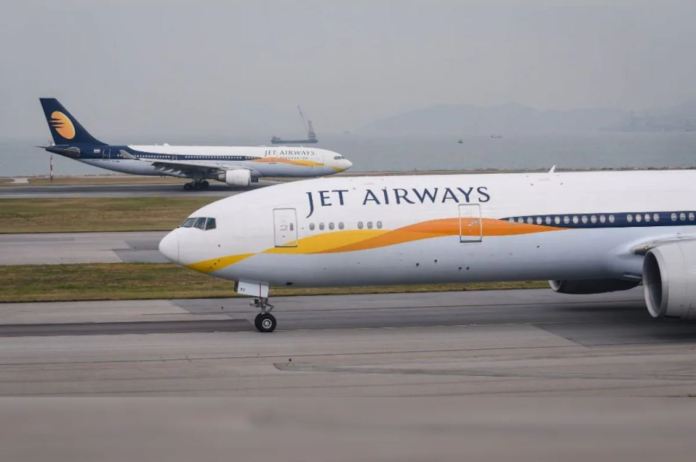 Jet Airways: Following a further setback to its recovery strategy, grounded airline Jet Airways has opted to put 60% of its employees, including senior management, on unpaid leave, while considering temporary pay cuts for the remainder, Moneycontrol reported citing sources.

“Even Sanjiv Kapoor (Jet chief executive officer) has agreed to take a substantial pay cut,” a source told Moneycontrol. Kapoor took to Twitter to calm nerves and said, “No one is being fired.”

The move comes after the Jalan-Kalrock consortium, the new owner of Jet Airways, informed the National Company Law Appellate Tribunal (NCLAT) of its inability to provide additional funds to settle provident fund and gratuity dues to employees totaling about Rs 250 crore on November 18.

“…While we await the handover of the company as per the NCLT process, the longer-than-expected time being taken for the same may result in some difficult but necessary near-term decisions to manage our cashflows to secure the future while the airline is still not in our possession,” a Jet Airways spokesperson said.

The consortium claimed in its attempt to acquire Jet Airways that it was not need to pay creditors anything more than Rs 475 crore and that all claims had to be satisfied using that amount.

It stated that all new claims not covered by the authorised resolution plan should be paid out of the airline’s cash position, which was approximately Rs 50 crore, with the balance coming from the banks’ portion of the airline.

According to a statement from Board Member of the Jalan-Kalrock Consortium, Ankit Jalan, more than 60% of the current Jet Airways workforce is made up of former employees. He continued by stating that there was a great deal of popular support for the restoration of the Jet Airways brand.

“The revived Jet Airways will also provide additional career opportunities, including the airline’s former staff who currently make up more than 60 percent of the current workforce, and for many more as the revived airline grows. Jet Airways would be a shining example of the IBC process working as intended in India,” Jalan said.

On October 21, NCLAT instructed the consortium to pay all outstanding gratuities and provident funds to airline crew members and staff up to June 2019, when the insolvency process would begin.

The resolution plan for the airline proposed by the consortium was contested in May before the NCLAT by the All India Jet Airways Officers and Staff Association.

After Jet was grounded in April 2019, its lenders brought it before NCLT.

The NCLT finally endorsed the Jalan-Kalrock Consortium’s resolution strategy after two years. The consortium suggested a total infusion of Rs 1,375 crore as part of the restoration strategy. This includes Rs. 900 crore for operating capital and capital expenditures as well as Rs. 475 crore for the payment of all creditors’ claims.

The total of Rs 475 crore will be divided as follows: Rs 380 crore will go to lenders, Rs 52 crore to workers and employees, and the rest amount will go to other operating creditors. A report claims that the lenders are worried about how these cash would be distributed.

In response, a representative for the Jalan-Kalrock partnership stated, “It has repeatedly advised the lenders that it is prepared with its cash for infusion. The Consortium has already given lenders a deposit of Rs 150 crore.

Additionally, it stated that it is ready to pay the plan’s 52 crore rupees in instalments. Following the NCLT’s approval, the resolution plan’s conditions precedent were all satisfied by May 20, 2022, and the relevant files were made with the tribunal on May 21, 2022.