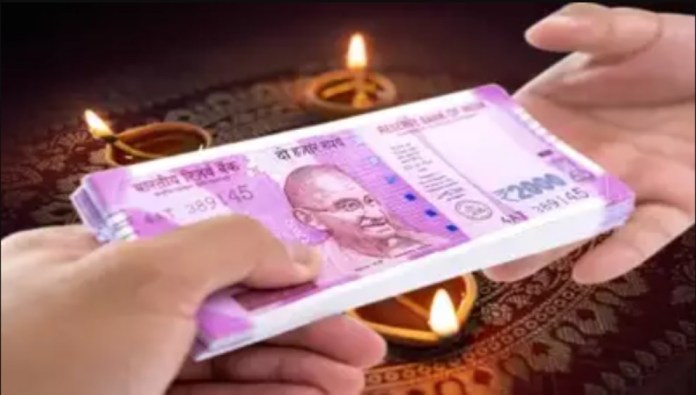 New Delhi: For the Financial Year 2021–2022, the Government has authorised the granting of Non-Productivity Linked Bonuses (ad hoc bonuses) to all non-gazetted personnel in Group B and Central Government Employees in Group C. Employees who are not protected by a productivity-linked bonus scheme are given the ad-hoc bonus.

In an Office Memorandum (O.M.) dated 6th October 2022, the Department of Expenditure (DOE) under the Ministry of Finance said that President has sanctioned the grant of “Non-Productivity Linked Bonus (Ad-hoc Bonus) equivalent to 30 days emoluments for the accounting year 2021-22 to the Central Government employees in Group ‘C’ and all non-gazetted employees in Group ‘B’, who are not covered by any Productivity Linked Bonus Scheme.”

The DOE further stated that a monthly salary of Rs. 7000 would be the computation ceiling for ad-hoc bonus payments.

The qualifying employees of the Central Paramilitary Forces and Armed Forces will also be entitled to receive an ad-hoc bonus. Additionally, it will be extended to Union Territory Administration employees whose salaries follow the Central Government pattern and who are not covered by any other bonus or ex-gratia programmes.

The O.M. specifies that the following terms and circumstances must be met in order for the ad-hoc bonus benefit to be admissible:

To be eligible for payment under these orders, an employee must have been employed as of 31.3.2022 and have provided at least six months of continuous service throughout the calendar year 2021–2022.

The qualifying personnel will be eligible for pro-rata payment for periods of continuous employment during the year ranging from six months to a full year.

The amount of Non-PLB (ad hoc bonus) shall be calculated using the lowest of the average emoluments or calculation ceiling.

The average annual salary will be divided by 30.4 to determine the ad-hoc of one day (average number of days in a month). The amount will be multiplied by the total number of bonus days awarded. The DOE gave an illustration to illustrate this:

Non-PLB (Ad-hoc Bonus) for thirty days would be calculated using the computation ceiling of monthly emoluments of Rs 7000 (where real average emoluments exceed Rs 7000). (rounded off to Rs 6908).

Real monthly emoluments will be used to determine the amount in circumstances where the actual emoluments are less than Rs. 1200 per month.