Royal Enfield Hunter 350 vs Yezdi Scrambler: Know which is better 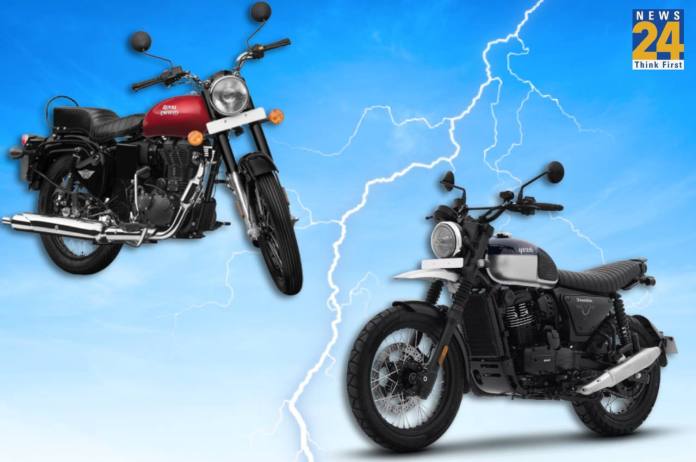 New Delhi: The newly launched Royal Enfield Hunter 350 is the company’s most affordable offering for India priced at Rs 1.49 lakh ex-showroom. The new Retro bike competes with the TVS Ronin as well as the Honda CB 350 RS and the new Yezdi Scrambler, though not directly.

The Royal Enfield hunter is priced at Rs 1.49 lakh ex-showroom. The Hunter 350 is available in three variants, priced below. The Yezdi Scrambler, on the other hand, is priced at Rs 2.07 lakh above (ex-showroom) and goes up to Rs 2.13 lakh, depending on color choice.

The Royal Enfield Hunter 350 Retro variant features an all-black design with a one-piece seat, side exhaust also in black and a single round headlamp. The Yezdi Scrambler, on the other hand, features a similar tank and sidebox design, but gets a high-slung front fender with twin exhausts.

Between the two, the Royal Enfield Hunter has a slightly shorter wheelbase, which means sharper handling, while the Yezdi Scrambler has better ground clearance. However, both bikes have the same overall weight, seat height and fuel capacity.

The Yezdi Scrambler gets a similar setup, getting a telescopic front fork, dual shock absorbers at the rear, 19-inch front and 17-inch rear wheels, disc brakes at both ends with dual-channel three-mode ABS, full-digital instrument panel and LED headlamp among others. Comparing the two in terms of equipment and features, the Yezdi Scrambler fares better.

The biggest difference between the two bikes is in the engine and transmission department. The Royal Enfield Hunter 350 is powered by a 350cc air-cooled single-cylinder engine that produces 20bhp of power and 27Nm of torque, mated to a 5-speed gearbox.

The Yezdi Scrambler gets a liquid-cooled single-cylinder engine with a capacity of 334 cc, which, with the help of a 6-speed gearbox, is capable of 28 horsepower and 28 Nm of torque. Between the two, the Yezdi is more powerful, offers marginally better torque, offers one more gear and is better cooled.

Which one should you buy?