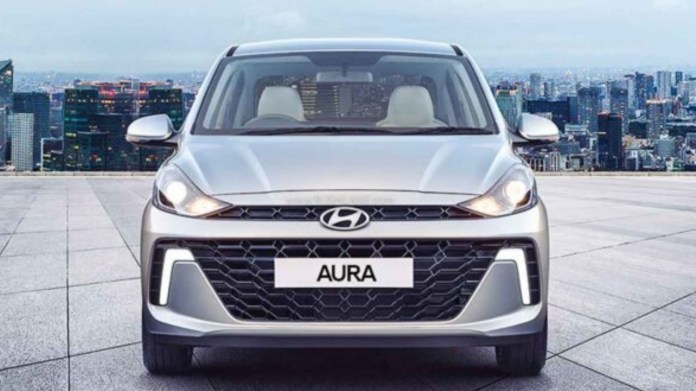 New Delhi: South Korean automaker Hyundai Motor has launched the facelift version of its sedan Aura in India. The starting ex-showroom price of this car has been kept at Rs 6.29 lakh. The company has already started booking for this car, for which customers will have to deposit a token amount of Rs 11,000. Along with this, the option of CNG has also been given in this car, whose initial ex-showroom price is Rs. 8.87 lakhs.

The Aura facelift sports a new front-end design with a more upright nose and a two-part grille. The compact sedan also gets new inverted L-shaped LED DRLs on the sides of the bumper, but the fog lamps have now been done away with. There has been no change in the side and rear profile. The 15-inch alloy wheels and the LED tail-light remain the same as before. All variants except the base trim get a boot-lid spoiler.

The interiors of the car now get a new Starry Night shade. On the inside, the layout of the cabin remains the same, but now it gets new upholstery on the seats, footwell area with new lighting and an updated instrument cluster.

The existing 1.2-litre engine has been retained in the Aura facelift, which outputs 83hp and 114Nm. It gets a 5-speed manual or AMT gearbox. Apart from this, the car also gets a factory-fitted CNG kit with the 1.2-litre petrol engine. This engine produces 69 hp power and 95 Nm torque. It only gets the option of a 5-speed manual gearbox. These powertrains are compliant with the new RDE norms and support E20 fuel as well.

The facelifted Aura will compete with the likes of Tata Tigor and Honda Amaze in the Indian market. Tata Tigor gets a 1.2-litre 3-cylinder petrol engine, which outputs 86PS/113Nm. It gets the option of 5-speed manual and 5-speed AMT gearbox. Along with this, CNG option is also available in it.