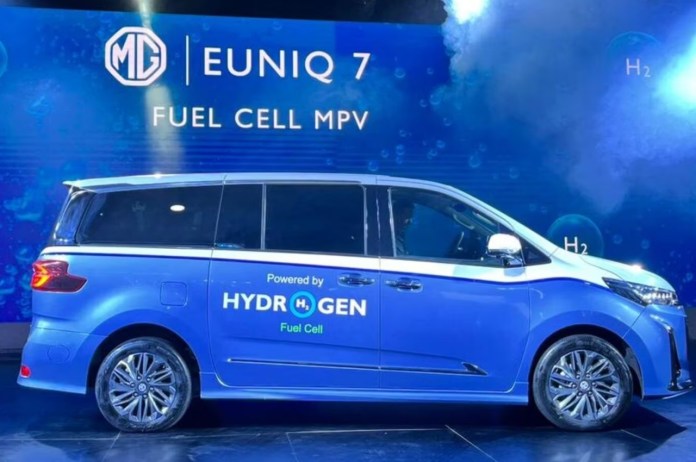 New Delhi: MG Motor has unveiled the fuel cell business class MPV MG Unique 7 on the second day of Auto Expo 2023. This MPV is equipped with modern business class features. The company has introduced this car with Autonomous and Advanced Drive Assistance feature (ADAS). MG Euniq 7 has been fitted with a 6.4 kg high pressure hydrogen cylinder. The company claimed that its cylinder is made from space grade material which can withstand temperatures up to 824 degrees.

Rajeev Chaba, MD, MG Motors India told that this MPV can give a range of 605 km on full tank hydrogen. This MPV is equipped with fast refilling technology. Its fuel tank can be filled in just 3 minutes. The engine of MG Euniq 7 MPV generates power with the help of hydro chemical reaction. At the same time, only water comes out from it as an emission. In the coming time, these vehicles can be launched in India.

Apart from this, MG Motor India has revealed the prices of its new MG Hector facelift while starting the Auto Expo 2023 with a bang. With this, the company has unveiled its upcoming electric car MG 4 (MG4) and electric SUV MG EHS (MG EHS) as well as MG 6 sedan (MG6). The name of MG’s pavilion at Auto Expo 2023 is MG Drive Ahead India vision and 14 cars are being showcased in it.

The new Hector 2023 was launched by MG during the Auto Expo. The company has launched the new SUV in the market with the option of five, six and seven seats. The SUV has been launched in a total of five variants. Which includes Style, Smart, Smart Pro, Sharp Pro and Savvy Pro. Gaurav Gupta, Chief Commercial Officer, MG Motors India said that the ex-showroom price of the new Hector 2023 starts at Rs 14.72 lakh. The ex-showroom price of its top variant is Rs 22.42 lakh.