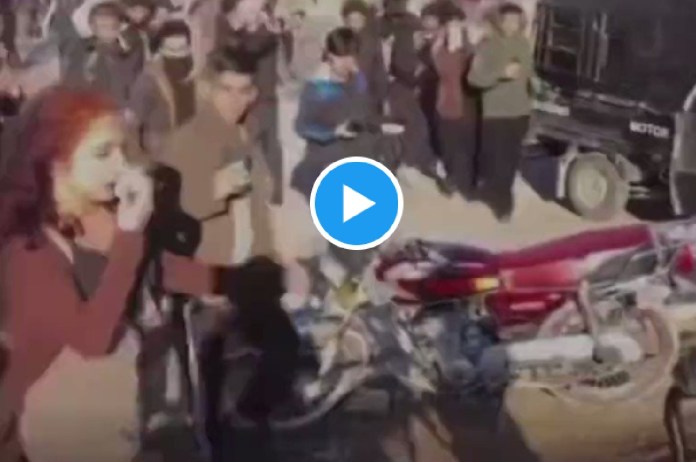 New Delhi: A video has surfaced on the internet where a 17-year-old girl was seen manhandled among a huge crowd of men as she was wearing shorts. The girl was accused of “distracting” crowd with her outfit.

Terrifying moment hundreds of men swarm around lone girl, 17, and attack her for 'dressing immodestly and distracting riders' at a motorcycle event in #Iraq pic.twitter.com/1QLM98M4rM

As seen in video, a few men from the crowd of many kicked the girl and abused her. They pushed her off the bike when she was trying to escape.

The shameful video shows how the crowd followed the girl when she was trying to avoud the mess. The men were yelling at her, saying bad words to her for her way of dressing.

As per media reports, the incident is from the Kurdistan region of Iraq. The incidnet took place when the woman went to attend a motorcycle event . She was then wearing a black top, a brown cardigan and a skirt.

Read More :-US COMMITTED TO STAND UP FOR WOMEN’S RIGHTS WORLDWIDE INCLUDING IN AFGHANISTAN: BLINKEN

Several from the crowd objected her clothes saying that she was “distracting” the riders with her clothes. After this, a bunch of men forced her to leave. The victim girl is a citizen of Iran.

The same girl gets hit by a car after being kicked by a man. However, later some motorcycle riders come and surrounded the girl to save her from the people.

The victim has been identified as El Tehrani. Earlier, a Kurdistan media site had reported that on December 30, men demanded the exclusion of women from the event. The victim had come to the show with a male companion A Khanak, who intervened and tried to save her from the mob.

But he was also beaten up. A person present in the crowd attacked the friend of the girl with a knife. The Sulemaniya police have arrested 16 persons in the case. Knives and swords were seized from them. The incident has happened at a time when women in Iran are protesting against the hijab and setting it on fire.