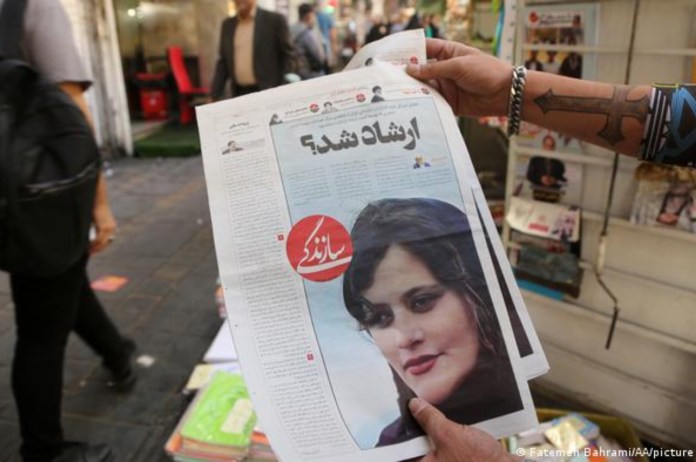 New Delhi: A young Iranian woman, who fell into coma following her arrest in Tehran by the notorious morality police, died on Friday, state media and her family said. A large number of activists have been urging the authority to hold the culprits responsible for her “suspecious” death.

Mahsa Amini, 22, was detained by the police division in charge of implementing the Islamic Republic’s stringent dress code for women, which includes the need that they wear headscarves in public, on Tuesday while she was visiting the Iranian capital with her family.

Protests broke out over the death in custody of Mahsa Amini, a young woman arrested by Tehran’s notorious “morality police” that enforce the country’s strict dress code for women pic.twitter.com/8b5L7Krsuj

“Unfortunately, she died and her body was transferred to the medical examiner’s office,” Iranian state television reported.

Her family was quoted in Persian-language media, notably the Iran Wire website and the Shargh daily, as saying that the once-healthy Amini had been taken to the hospital shortly after her arrest in a coma and had since passed away.

What transpired between her arrival at the police station and her departure for the hospital is still unknown. She reportedly took a blow to the head, according to the 1500tavsir channel, which tracks infractions in Iran.

Images shared on social media showed people congregating outside the hospital where she was receiving treatment and cops attempting to scatter the mob. Later in the evening in Tehran, people could be seen yelling anti-regime chants in a furious manner.

“The circumstances leading to the suspicious death in custody of 22-year-old young woman Mahsa Amini, which include allegations of torture and other ill-treatment in custody, must be criminally investigated,” Amnesty International said.

“The so-called ‘morality police’ in Tehran arbitrarily arrested her three days before her death while enforcing the country’s abusive, degrading and discriminatory forced veiling laws,” it added.

“All agents and officials responsible must face justice.”