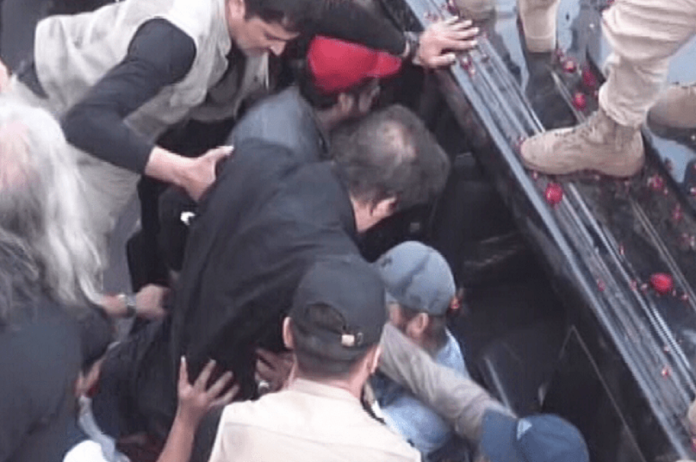 Khan, 70, was shot and wounded in the leg in an attack on his protest march in the eastern city of Wazirabad in Punjab province. He was out of danger in what his party claimed was an “assassination attempt.”

“I have sought an immediate report from the authorities. I pray for the speedy recovery of him and all the injured. My condolences to the family of the political worker who died during the incident,” he tweeted.

— The President of Pakistan (@PresOfPakistan) November 3, 2022

Expressing his shock over the incident, Prime Minister Shehbaz Sharif said he condemned the attack on Khan. “I condemn the incident of firing on PTI Chairman Imran Khan in the strongest words. I pray for the recovery and health of PTI chairman & other injured people,” Sharif tweeted.

He also directed the interior minister to submit an immediate report on the incident.

“Firing incident during Long March near Gujranwala is highly condemnable,” the Inter-Services Public Relations (ISPR), the media wing of the military, tweeted.

“Sincere prayers for precious life lost and speedy recovery and well being of Chairman PTI Mr Imran Khan and all those injured in this unfortunate incident,” it said.

Defence Minister Khawaja Asif, speaking on the floor of the National Assembly, said that the firing incident is a manifestation of increasing violence in the politics of the country, reports news agency PTI.

“I believe today’s incident shows the deterioration in our politics,” he said. “The entire nation is condemning this incident”, he said. He also said use of words like killing and burning in politics by politicians give a licence to their followers to use such methods.

“Because if it persists, our words will fade away and only the noise of bullets and violence will be heard,” he said and added: “We must not resort to violence because it undoes society”.

Strongly condemn the attack on @ImranKhanPTI. Praying for his swift recovery.

According to local media reports, at about 4:25pm on Thursday, chaotic scenes broke out near the PTI’s reception camp at Allahwala Chowk in Gujranwala after gunshots were fired at Khan. The suspect who opened fire on Khan’s container has been arrested.