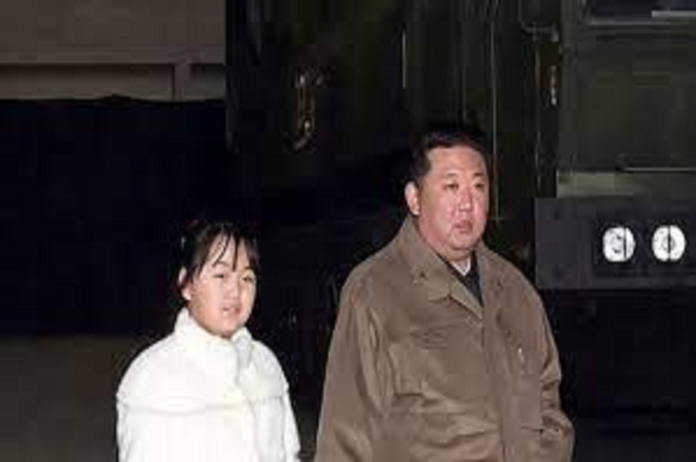 North Korean leader Kim Jong Un revealed his daughter to the world for the first time on Saturday, in stunning photos of the pair inspecting the launch of the country’s largest ballistic missile the day before.

North Korea tested a Hwasong-17 intercontinental ballistic missile (ICBM) on Friday, according to the state news agency KCNA on Saturday. The presence of Kim’s daughter, whose existence had never been publicly confirmed before, was the biggest surprise.

KCNA did not identify the girl, who was photographed wearing a white puffy coat and holding hands with her father as they gazed at the massive missile.

According to Michael Madden, a North Korean leadership expert at the US-based Stimson Center, “This is the first time we have seen Kim Jong Un’s daughter at a public event. It is highly significant and demonstrates Kim Jong Un’s level of comfort in bringing her out in public in this manner.”

According to experts, Kim may have three children, two girls and a boy. Some observers believed one of those children was seen in footage from a September national holiday celebration.

Dennis Rodman, a retired American basketball player, revealed in 2013 that Kim had a “baby” daughter named Ju Ae. Rodman told The Guardian newspaper after a trip to North Korea that year that he spent time with Kim and his family and held the baby.

According to KCNA, Kim’s wife, Ri Sol Ju, also made a rare appearance at the launch on Friday.

“There is strategic messaging involved whenever Ri Sol Ju appears. Normally intended to calm nerves, counteract other aggressive messaging (such as tests), or demonstrate Kim family cohesion during times of internal strife, “said Ken Gause, a North Korea leadership expert with CNA, a non-profit research organisation based in the United States.

Her presence also fits into a trend of Kim “normalising” politics within the regime and the dynamics surrounding his position as supreme leader, according to Gause.