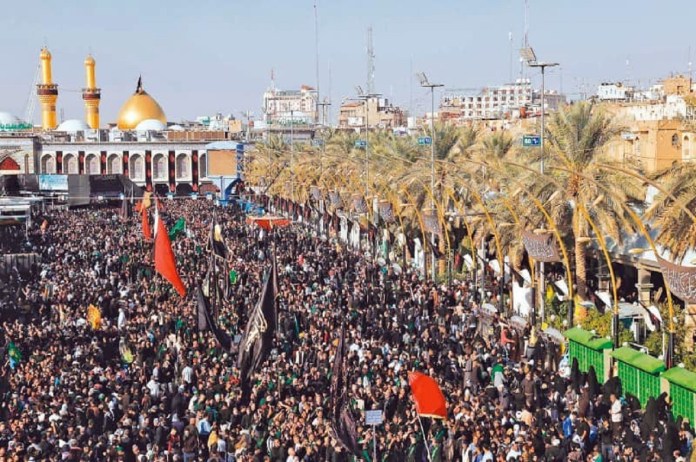 Pilgrims dressed in black also gathered at the holy shrine of Imam Husayn in Karbala on Saturday. For the last two years, this trip was very much affected due to Covid pandemic.

The occasion is observed 40-days after Ashura – the commemoration of the death of the Prophet Muhammad’s grandson, Husayn, in the Battle of Karbala, which took place in 680 AD on the 10th day of Muharram, the first month of the Islamic calendar.

The grandson of Prophet Muhammad was killed along with his companions during the battle of Karbala in 680 AD. On the occasion of his martyrdom anniversary, a procession was going on here for the last one week, which ended on Saturday.

The event is regarded as one of the foundational moments of Shia Islam.

Husayn symbol of the fight against autocracy

It is said that the martyrdom of Imam Husayn is a symbol of the fight against injustice, oppression and autocracy. Millions of men, women, teenagers and the elderly had come to pay tribute to Imam Husayn in Karbala, Tehran.

This annual program of the martyrdom of Imam Husayn is one of the largest religious gatherings in the world. On this occasion the lovers of Imam Husayn gather together and cover a distance of 80 kms between the holy cities of Najaf and Karbala.

Special care is taken for pilgrims

The food and other services of the pilgrims are taken care of during the walking distance between the holy cities of Najaf and Karbala. Mausab (tents) and special stands are made on the walkway.

Ali al-Badri, in charge of Iraq’s media services, said that we are happy to serve more and more pilgrims. Cleaning and other services were provided free of charge to meet the needs of pilgrims coming from Iraq and abroad.

Pilgrims from many countries reached Karbala

Over the past weeks pilgrims from countries including Iran, Afghanistan, Pakistan, Azerbaijan, Bahrain, Kuwait and Saudi Arabia have arrived in Karbala, about 100 kilometres southwest of Iraq’s capital Baghdad.