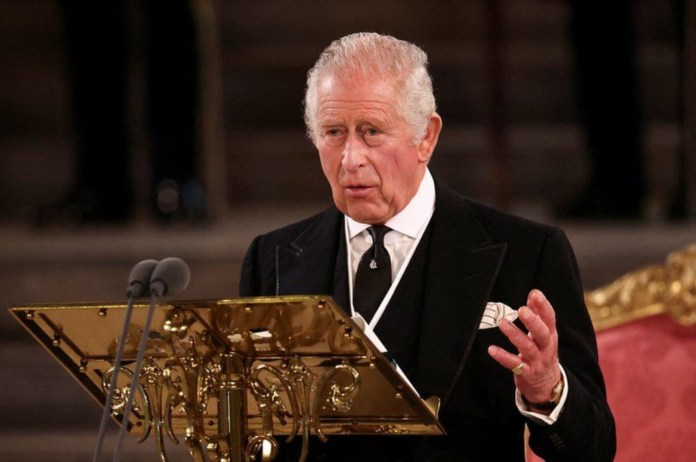 New Delhi: In a speech to both houses on Monday, King Charles referred to the British parliament as the “living and breathing instrument of our democracy” and vowed to follow his late mother Queen Elizabeth in upholding its independence.

Following the queen’s passing on Thursday at her vacation home in Balmoral, Scotland, after 70 years as monarch, Charles and Camilla, the Queen Consort, arrived at Westminster Hall in London for the speech to a fanfare of trumpets. This was just one of many pageantry-filled ceremonies that followed the queen’s passing.

Following the speech, the new king left for Edinburgh to travel with his siblings in a sad procession as Queen Elizabeth’s body was brought to the city’s ancient church.

After that, they will attend a vigil at St. Giles’ Cathedral on the historic Royal Mile in the Scottish capital, where the body will repose until being taken to London on Tuesday.

Parliamentarians from the House of Commons and the House of Lords attended the address in Westminster Hall along with Prime Minister Liz Truss, who is still just in her first week in office.

The late queen was “both a leader to and a servant of her people,” said the Lord Speaker.

In front of Charles and Camilla, cavalry men in red tunics and plumed helmets stood at attention as they sat on ceremonial seats.

In his address, Charles said: “While very young, Her late Majesty pledged herself to serve her country and her people and to maintain the precious principles of constitutional government which lie at the heart of our nation. This vow she kept with unsurpassed devotion.”

“She set an example of selfless duty which, with God’s help and your counsels, I am resolved faithfully to follow.” The assembly sang “God Save the King”.

Charles, 73, is well known for airing his opinions on a variety of topics, including the environment and youth concerns. Charles automatically became king of the United Kingdom and 14 other kingdoms, including Australia, Canada, Jamaica, New Zealand, and Papua New Guinea, upon the death of his mother.

He has implied that in order to uphold the custom that the monarch stays out of political concerns, he might need to moderate his approach as king.

The queen’s oak casket was transported to Edinburgh by hearse on Sunday after a six-hour journey from Balmoral through the stunning Scottish countryside, villages, small towns, and metropolis.

Numerous groups, some in tears, gathered in Edinburgh to welcome the cortege as tens of thousands of well-wishers lined the streets to show their respect.

“I think when the queen’s coffin emerged from Balmoral Castle yesterday, I think that it was a moment of enormous significance,” John Swinney, Scotland’s Deputy First Minister told BBC radio.

“I think people drew breath, because what we’ve all been living through over the last few days suddenly became real, it became visible.”

The Duke of Hamilton and Brandon, the highest ranking Scottish peer, will place the Scottish Crown on the coffin as it arrives at St. Giles’ Cathedral.

The coffin will remain there for 24 hours following the service so that mourners can pay their respects. Soldiers from the Royal Company of Archers, the monarch’s “Body Guard in Scotland,” will hold a vigil.

Later, at 7.20 p.m., Charles will hold a vigil. He will also visit the Scottish Parliament and meet Nicola Sturgeon, the First Minister of Scotland. together with other royals at 18:20 GMT.

The casket will be transported by air to London on Tuesday, where it will arrive on Wednesday and begin to lie in state until early on September 19 — the day of Queen Elizabeth II’s royal burial — at Westminster Hall.

Soldiers or Yeoman Warders, also referred to as beefeaters, from the Tower of London will defend it.