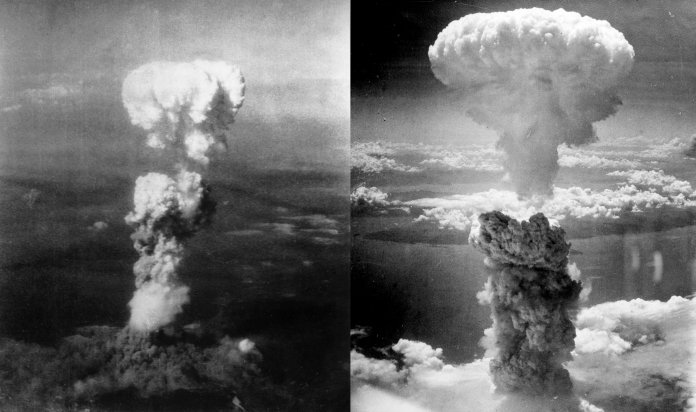 Share
Facebook
Twitter
Pinterest
WhatsApp
New Delhi: Hiroshima was atomically bombed in the closing days of World War II, and Japan commemorated the event on Saturday.
According to the Xinhua news agency, a moment of silence was held at 8:15 a.m., the exact time a uranium bomb dropped from a US bomber exploded over the city on August 6, 1945, killing over 140,000 people by the end of the year and exposing many more to dangerous radiation.
Hiroshima Mayor Kazumi Matsui issued a warning during a mourning service at the Peace Memorial Park, stating that the global reliance on nuclear deterrence is growing.
We must immediately render all nuclear buttons meaningless,” he said.
Prime Minister Fumio Kishida, ambassadors from 99 nations, and UN Secretary-General Antonio Guterres, who attended the ceremony for the first time in 12 years, were also present.
Guterres warned that a new weapons race is accelerating in his speech.
The Prime Minister said, “Japan will pursue this goal despite global security tensions, and while following the three principles of not possessing, producing or permitting the introduction of nuclear weapons into the country”.
Public broadcaster NHK reports that more than 3,000 spectators attended the ceremony, a significant rise from the attendance in the opening two years of the coronavirus pandemic in 2020 and 2021.

After adding the names of 4,978 persons who died or were verified dead during the past year, officials re-posted a list of the bombing victims in a cenotaph.

The current total is 333.907. Today, the average age of those who survived an atomic explosion is over 84.