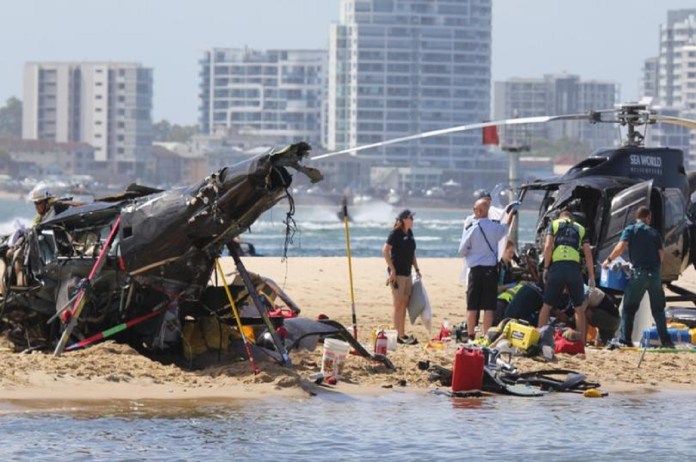 Canberra: Four people were killed and three others were in critical condition after two helicopters on Monday collided at the Gold Coast in the Australian state of Queensland.

“About 2:00 pm today, police and emergency services were called to a two-helicopter midair collision just opposite Sea World in the Broadwater. Those two aircraft then collided, have crashed and landed on the sandbank just out from Sea World resort,” Queensland Police South Eastern Regional Duty Officer Gary Worrell told reporters, as reported by Xinhua news agency.

According to his briefing, one airframe had its windscreen removed and landed safely on the island, while the other crashed and became upside down.

“Four people have lost their lives today and we have three others who are critical in hospital,” said the officer.

Thirteen people were on the two helicopters, according to Jayney Shearman, from the Queensland Ambulance Service (QAS).

Photos from the site show debris lying on a strip of sand, with personnel gathered on land and numerous vessels in the surrounding waters.

Worrell said that though it’s too early to determine the exact cause of the accident, initial inquiries suggests one helicopter had been taking off and the other landing when they collided.

One helicopter “has its windscreen removed, and it’s landed safely on the island. The other (helicopter) has crashed, and it was upside down,” he said.

He added that after the crash, nearby police and members of the public rushed to the site, trying to remove and perform first aid on those inside the helicopter.

Angus Mitchell, Chief Commissioner of the Australian Transport Safety Bureau (ATSB), said in a statement that an investigation had been launched into the collision.

Meanwhile, the state’s premier Annastacia Palaszczuk expressed her condolences on her social media, regarding the crash as “an unthinkable tragedy”.

“My deepest sympathies are with each of the families and everyone affected by this terrible accident,” the state premier wrote.