HomeWorldFormer US President Obama back in WH, unveils official portraits

Former US President Obama back in WH, unveils official portraits 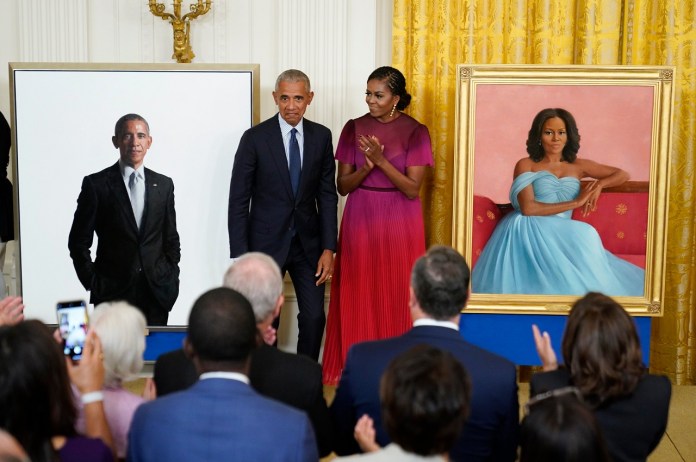 It marked the first time in 10 years since a sitting president had invited former leadership back for a revealing of the portraits — a tradition that stalled when an unveiling did not take place during the Trump years.

Barack and Michelle, welcome back. pic.twitter.com/wcdBvfMcGg

“These portraits have a special significance, Obama said, adding that “it was important to find the right people to paint them,” reports NPR.

Obama thanked Sprung for capturing Michelle Obama, “Her grace, her intelligence – and the fact that’s she’s fine,” Obama said, as the former first lady rolled her eyes, later thanking him for his “spicy remarks.”

“His work is so precise that at first glance it feels like a photograph,” Obama said, explaining that the style helps viewers connect with the subject, and get an “honest sense” of who he is.

“When future generations walk these halls and look up at these portraits, I hope they get a better honest sense of who Michelle and I were. And I hope they leave with a deeper understanding that if we could make it here, maybe they can, too. They can do remarkable things, too,” Obama added.

In a video with the Obama Foundation, Sprung and McCurdy discuss the approach they took to painting the couple.

“I wanted people to pass by the painting and recognize her, or be more curious about her, or to read more about her, but to get her,” Sprung said.

Former first lady Michelle Obama is painted wearing a formal blue dress and is seated on a sofa in the Red Room. The process, Sprung said, took 18 months, according to the report.