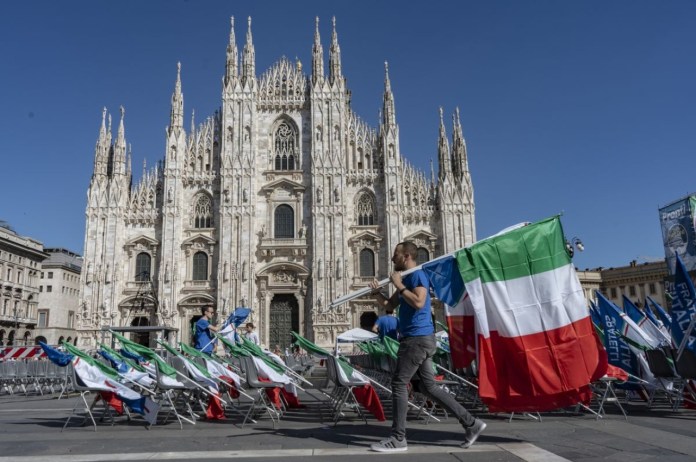 New Delhi: A rightist alliance is expected to win the parliamentary election this weekend, which could put Rome on a collision course with Brussels. Italy’s leaders conducted their final rallies on Friday before of the election.

Three center-left and centrist parties had their final gatherings in several locations throughout the Italian city, highlighting their failure to form a cohesive electoral alliance, which greatly benefited the conservative bloc.

The Brothers of Italy, a nationalist organisation led by Giorgia Meloni, are expected to take the lead on Sunday and share power with the League, led by Matteo Salvini, and Silvio Berlusconi’s Forza Italia.

Although Meloni has sought to present a moderate image, she and Salvini have both been harshly critical of the European Union, charging Brussels with meddling excessively in national affairs. Brothers of Italy has its roots in a post-fascist movement founded at the close of World War Two.

The European Commission President Ursula von der Leyen cautioned late Thursday that if things go a “difficult course,” Europe has “the instruments” to deal with Italy, ratcheting up tensions at the close of a relatively lacklustre campaign.

Salvini held a brief demonstration in front of the Commission headquarters in Rome to criticise von der Leyen while other leaders spoke to their supporters in other places in Rome and elsewhere. He said, “This is shameful arrogance.”

The last gathering of the 5-Star Movement was conducted nearby by former prime minister Giuseppe Conte, who is the only person who has the potential to thwart the right’s ascent to power.

Conte has restored 5-Star fortunes by promoting its centrepiece “citizens income” aid for the needy, which the right seeks to abolish. Conte was written off two months ago after he withdrew his support for Prime Minister Mario Draghi and destroyed the unity government.

A right-wing landslide may possibly be avoided, according to pollsters, because of his unrelenting message’s resonance in the poorer south, where hundreds of millions rely on welfare.

“The rights’ goal is to starve part of the people and that is clearly why the citizens income bothers them,” said Mauro Battista, 50, a taxi driver and 5-Star voter.