BIG BREAKING: US recognizes Russia as sponsor state of terrorism 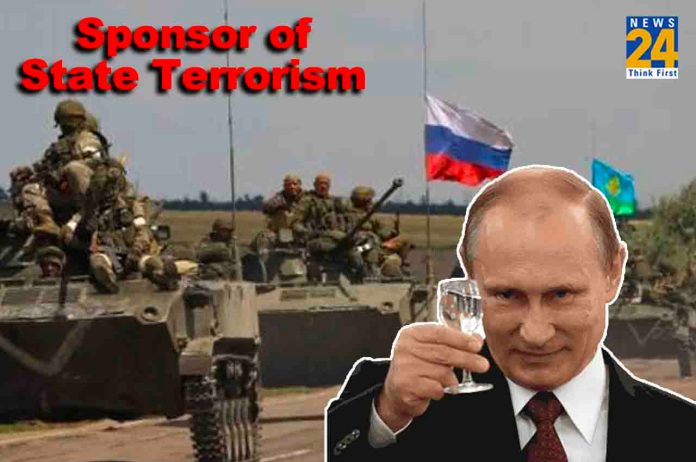 New Delhi: The US Senate has passed a resolution calling on the State Department to recognize Russia as a state sponsor of terrorism due to the war in Chechnya, Georgia, Syria and Ukraine.

This is what the resolution majorly demands

The resolution mainly sought two prime demands. It reads that the Senate

Here are the details sought in the resolution

These nations are already designated as state sponsors of terrorism

Act of terror in Chechnya and Donbas

The resolution further marks the campaign of terror, use of brutal force targeting civilians during the Second Chechen War. Actions of Russian Federation in Chechnyan capital Grozny left numerous civilians dead or wounded.

Moscow has supported the separatists, engaging in acts of violence against Ukrainian civilians in the Donbas region.

Act of terror in Syria

The Russian government entered the Syrian Civil War in 2015. The civilian causalities occurred with attacks on civilian markets, medical facilities, and schools.

Russia also supplies material support to Syria. Problem being, the US already designates Syria as a state sponsor of terrorism.

Russia spreads terror throughout the world using private military networks of mercenaries such as the Wagner Group. This show Moscow’s effort to project power cheaply and deniably.

Wagner Group is supported by Russian government and its Ministry of Defence. They advance foreign policy objectives on behalf of Moscow.

Department of treasury identifies the Wagner group as “a designated Russian Ministry of Defence proxy force.” It also states that Wagner’s action in nations like Ukraine, Syria, Sudan, and Libya have generated insecurity and incited violence against civilians.

It was reported during the war with Ukraine, over 400 Russian mercenaries belonging to the Wagner Group deployed. They were sent to assassinate Volodymyr Zelenskyy and other members of Ukrainian government.

These people appealed recognition of Russia as terrorist state

Head of Organization for Security and Co-operation in Europe, Zibigniew Rau made a demand. He sought Washington’s nod to recognize Moscow’s action against innocent Ukrainians and civil infrastructure as ‘state terrorism’.

Ukrainian President Volodymyr Zelenskyy on March 17, 2022 made an appeal to the world. He sought the acknowledgement of Russian Federation as a terrorist state.

Verkhovna Rada of Ukraine has appealed to Congress to encourage the Department of State to recognize the Russian Federation as a state sponsor of terrorism.  He said, “the Russian Federation has for years supported and financed terrorist regimes and terrorist organizations, including being the main supplier of weapons to the Assad regime in Syria and supporting terrorists in the Middle East and Latin America, organizing acts of international terrorism, including the poisoning of the Skripal family in the United Kingdom of Great Britain and Northern Ireland, the downing of a civilian Malaysian airliner and other acts of terrorism.”

The Russian Federation has committed numerous summary executions against innocent civilians. They have tried to cover up their atrocities with mass graves across Ukraine.