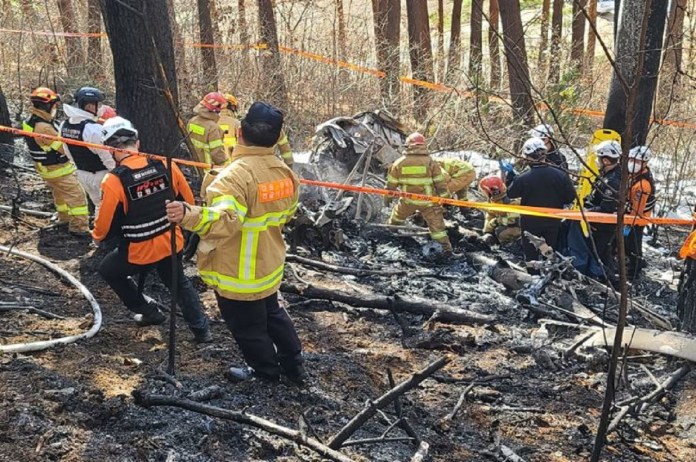 Seoul: As many as five people were killed in a crash of a US-made helicopter in South Korea’s Gangwon Province on Sunday.

The five included the 71-year-old pilot and a 54-year-old mechanic, who were initially believed to be the only two people on board. Rescue workers later found three more bodies — one of a person in their 20s and two women — at the site of the accident. Surveillance camera footage confirmed there were five people on board the chopper, Yonhap news agency reported.

The US-made Sikorsky S-58T helicopter crashed in the coastal county of Yangyang at around 10:50 local time (01:50 GMT). Smoke started coming from the site, after which parts of the helicopter caught fire.

The fire authorities deployed one chopper, 28 pieces of equipment and 114 personnel, including first responders, to the scene.

South Korean Prime Minister Han Duck-soo ordered local authorities to do everything possible to eliminate the consequences of the crash and help families of the victims, according to the report.

This is the fourth helicopter crash in South Korea in the last two years, and all four times the accidents involved aircraft made by US manufacturer Sikorsky Aircraft.

In April 2021, an S-76C+ helicopter crashed, killing one person and injuring another. In April 2022, two co-pilots were killed and a mechanic went missing in an S-92 helicopter accident. Another co-pilot was rescued.

In May 2022, an S-61N forest firefighting helicopter also crashed, killing a crew captain and injuring a co-pilot and a mechanic.